Surigao del Sur is not only enchanting because of the famous clear blue river in Hinatuan but also of the many things that it can offer to its visitors. Though the weather is not very cooperative, I took the after midnight bus at Ecoland Bus Terminal in Davao City and headed to Bislig, Surigao del Sur. 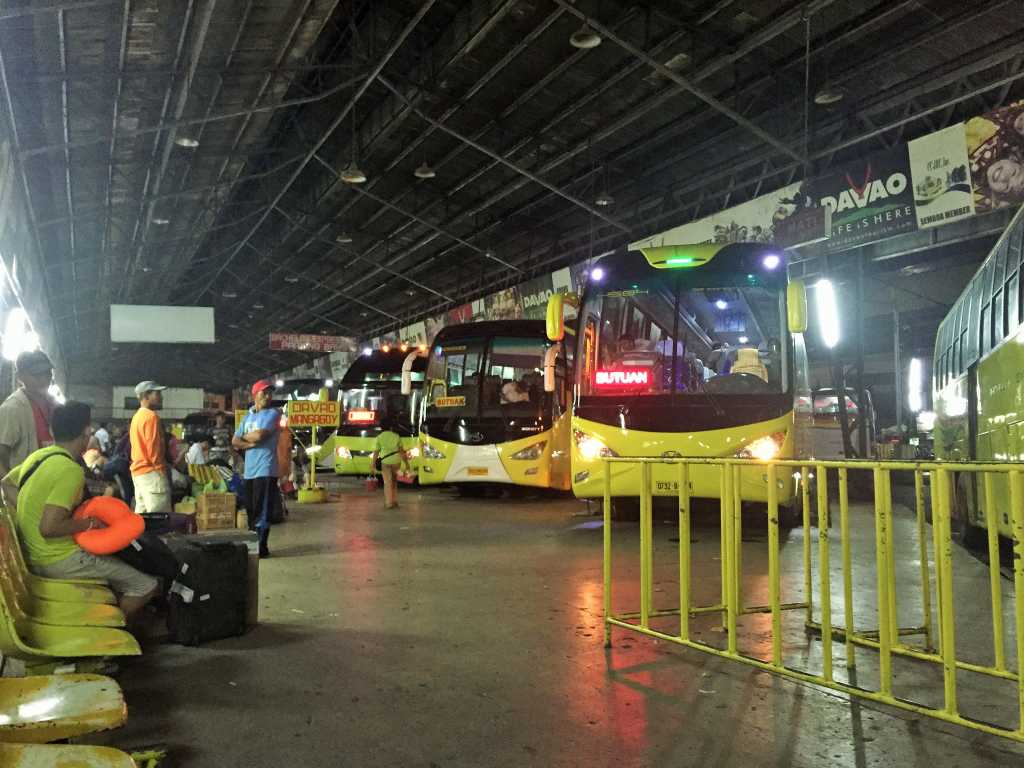 It was early morning when I reached the city and immediately, the bus conductor informed motorcycle drivers who are waiting for visitors at the bus stop. Totally unlike with my trips, I did not arrange anything for my transportation and accommodation. I spoke to the drivers and agreed the price for a whole day tour. 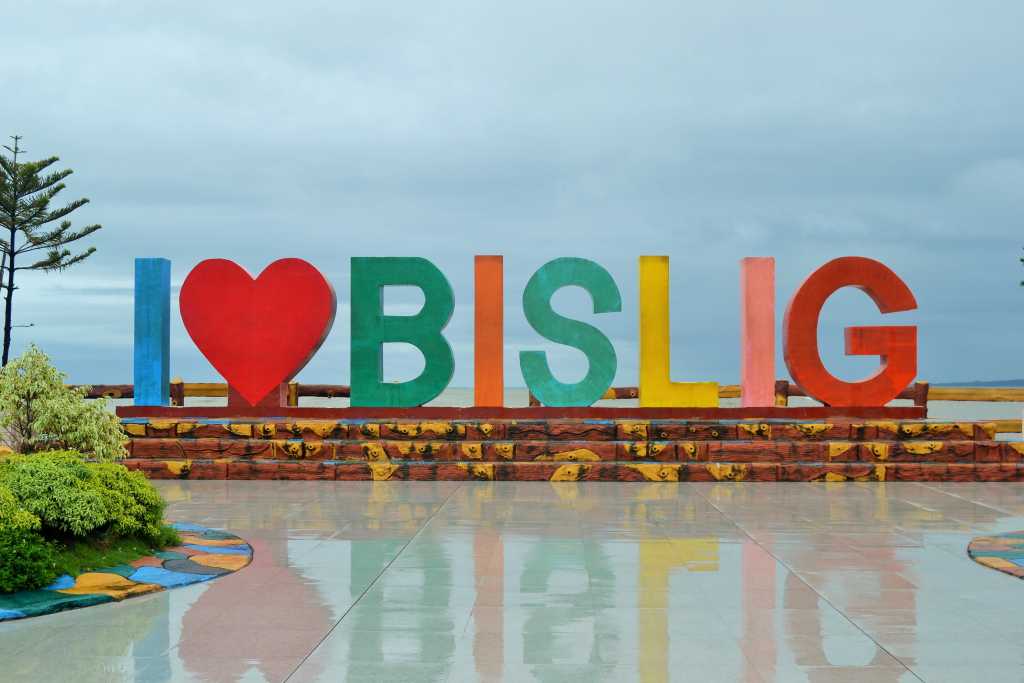 It was a rainy day, the sea was angry and I was first brought at the famous landmark of the city. From there, we went directly to the Enchanted river. It was a long ride by motorcycle, but the road is good, except that it was raining. 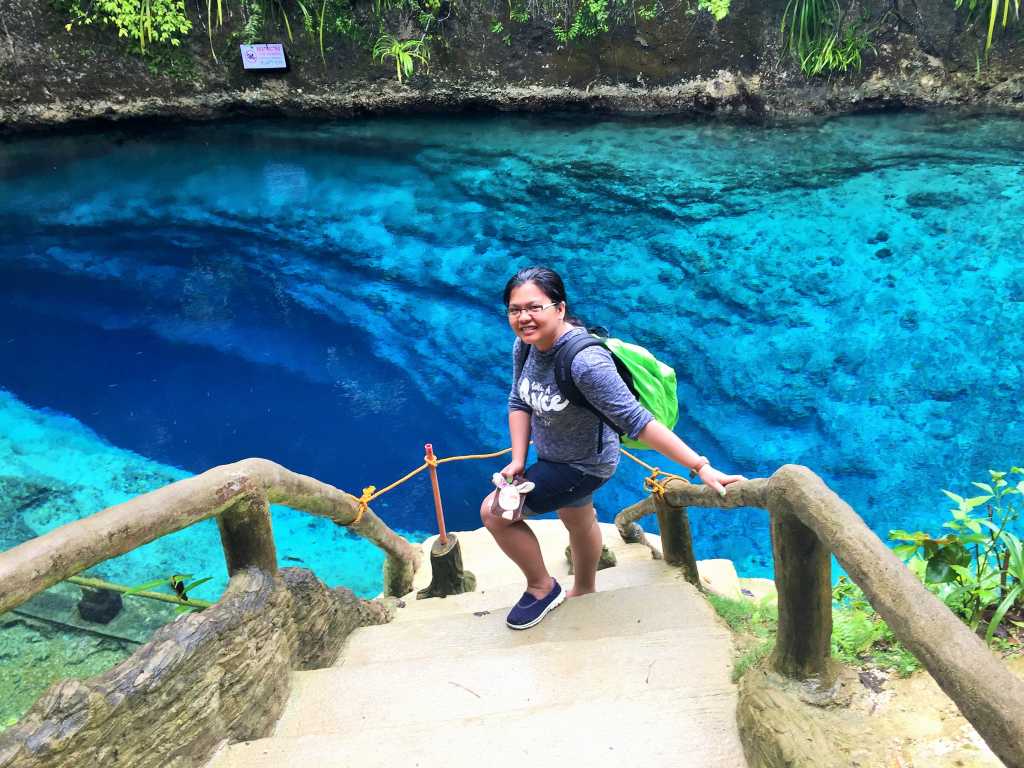 I paid the entrance fee of PHP 30.00 and walked inside. Fortunate enough, the river was just opened again to the public after being closed for months maintenance. The government of Surigao took much effort in preserving the natural wonder of the river including its cleanliness. 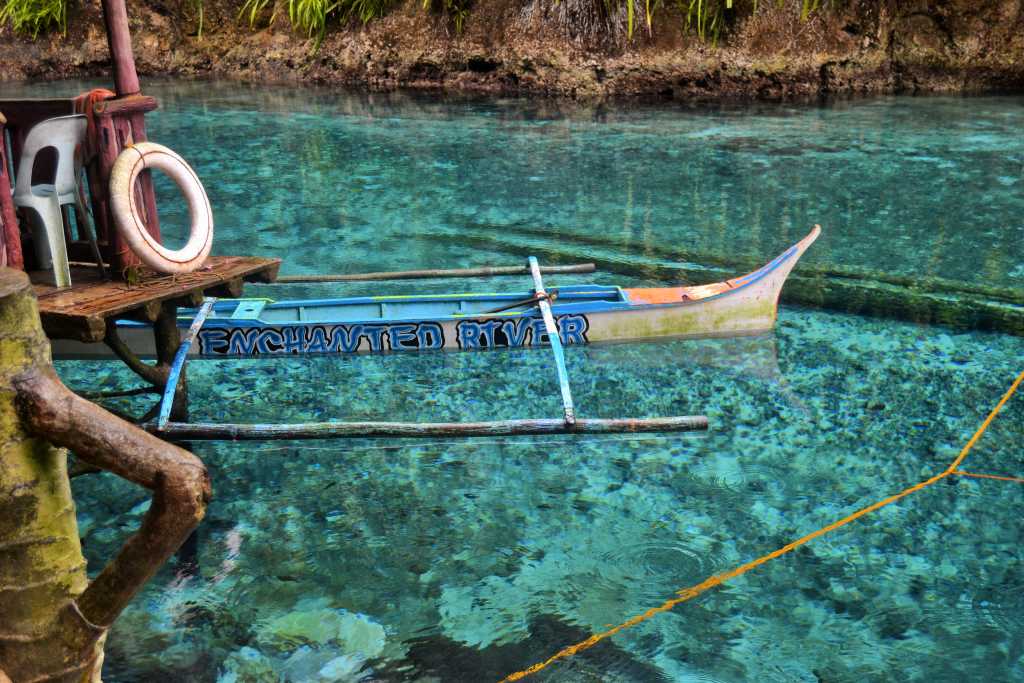 Enchanted as it is called, none of its visitors left the river without reaching their topmost expectations. The beginning of the river is deep blue in color, then a part of it turned azure, then to turquoise and lastly to emerald.  Truly a beautiful thing to marvel. 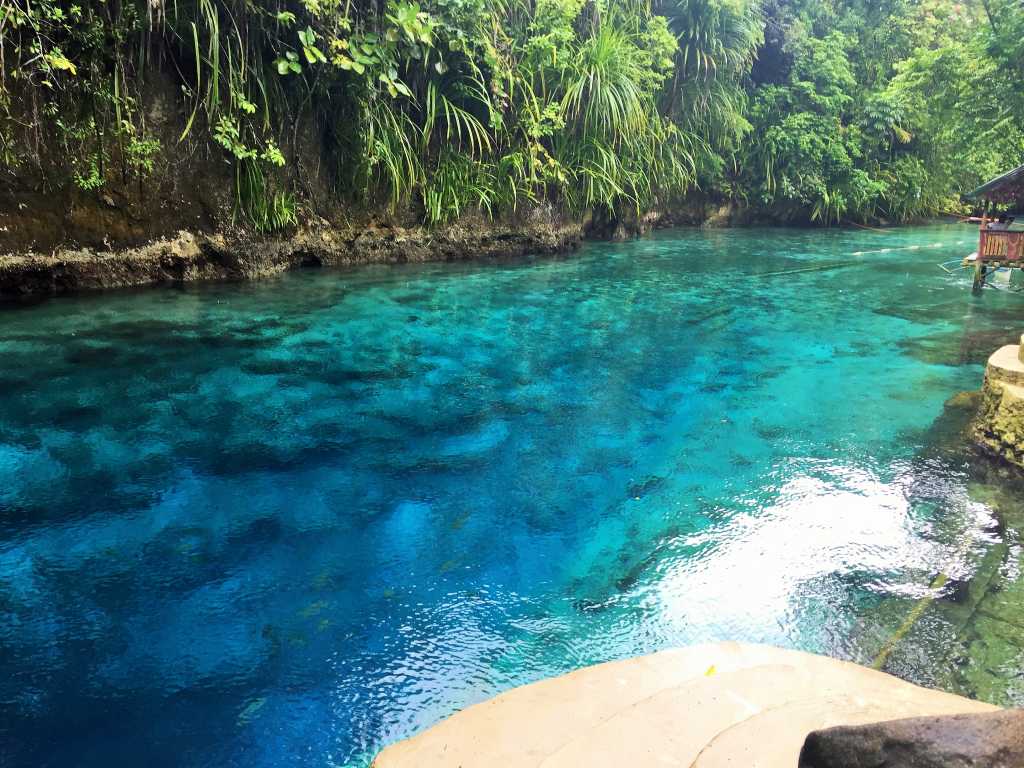 The way the crystal clear water changes its color is definitely a wonder that is indescribable. Locals believed that the river is being watched and protected by fairies. 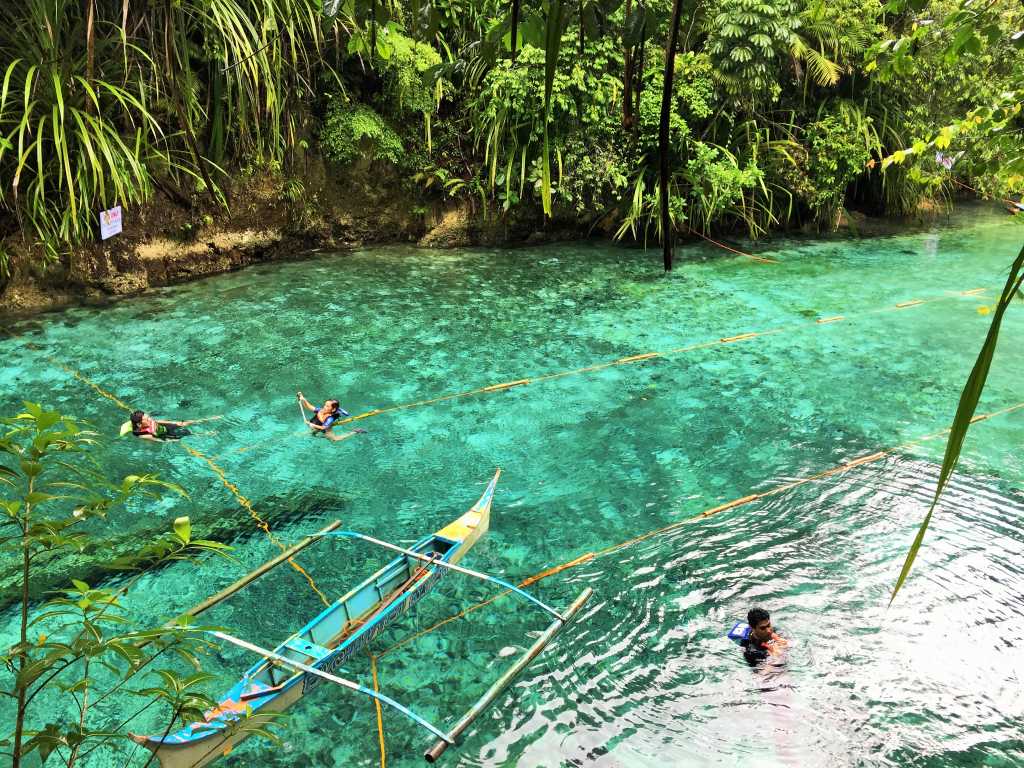 The river is directly connected to the pacific ocean and its beginning is a thing that only nature can answer. No one knows where the water is coming from but you will see it flowing to the open sea. The bluest part of the river is  very deep that no one has ever touched its bottom. As locals said, there is an opening under that leads to somewhere that remains unknown. Many tried to check what is under Hinatuan river, but ended up finishing their oxygen. Accordingly, they have to come back and stop their amazement and curiosity. Until now, what is under the river is still an unanswered mystery. 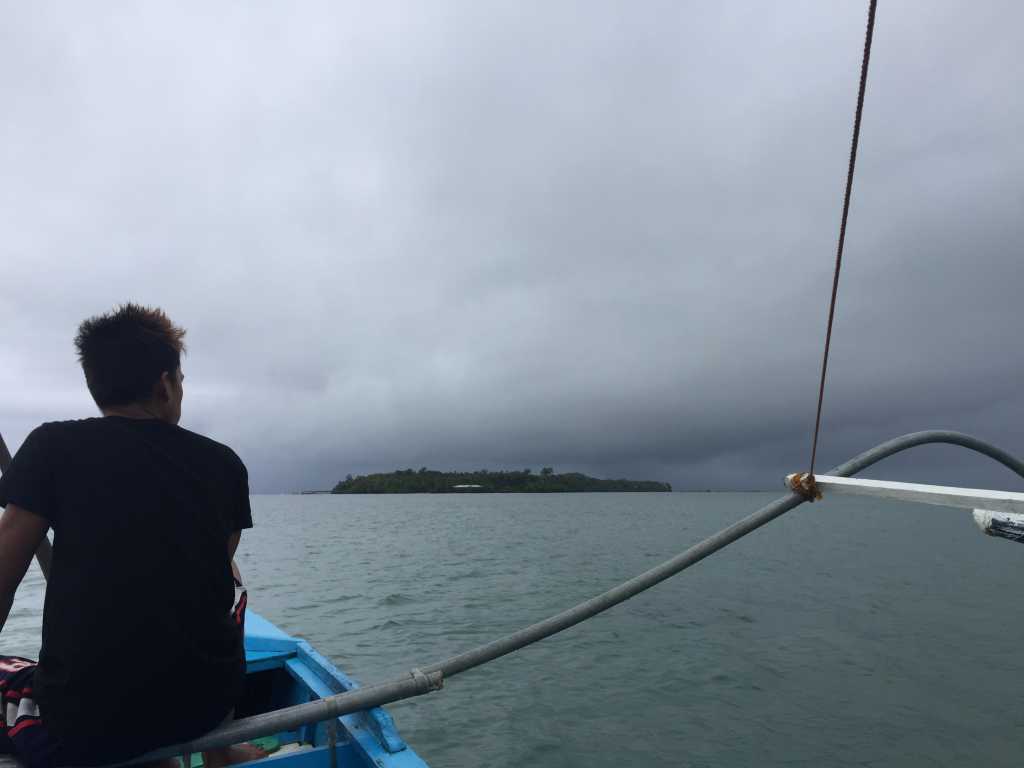 Despite the very bad weather condition, I decided to rent a boat for 2 hours and go island hopping. 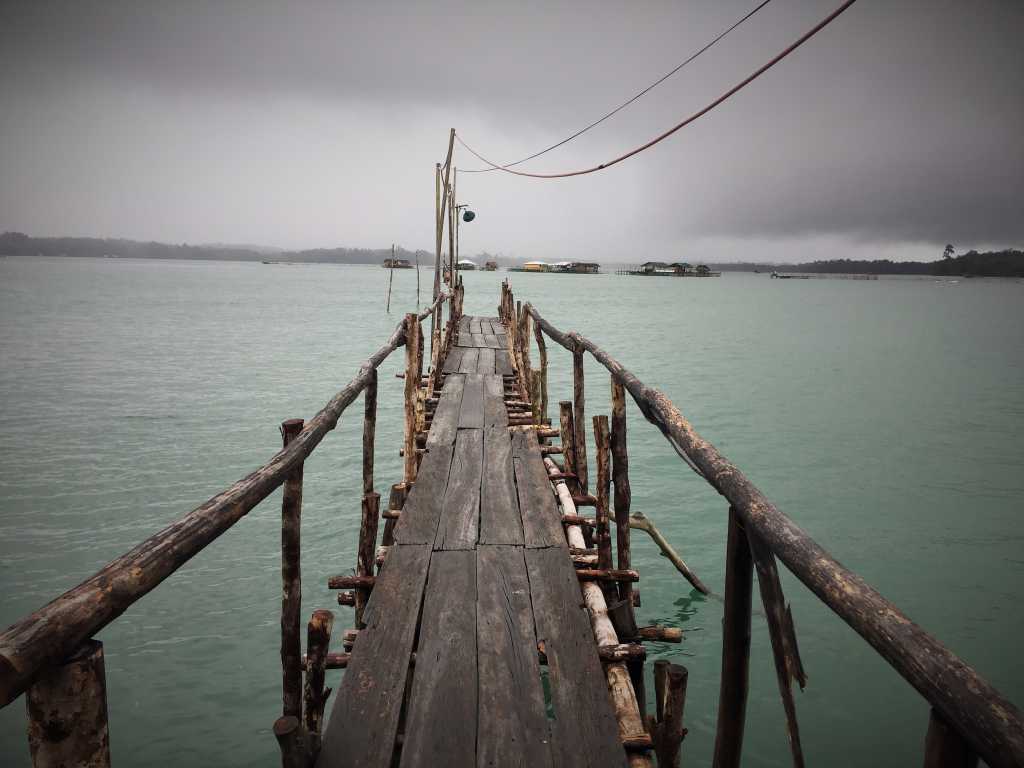 I reached C Fish Cage and Sand Bar Resort, which is located in the middle of the sea. I paid the entrance fee of PHP 20.00 and you are free to see the fish cages and feed them. 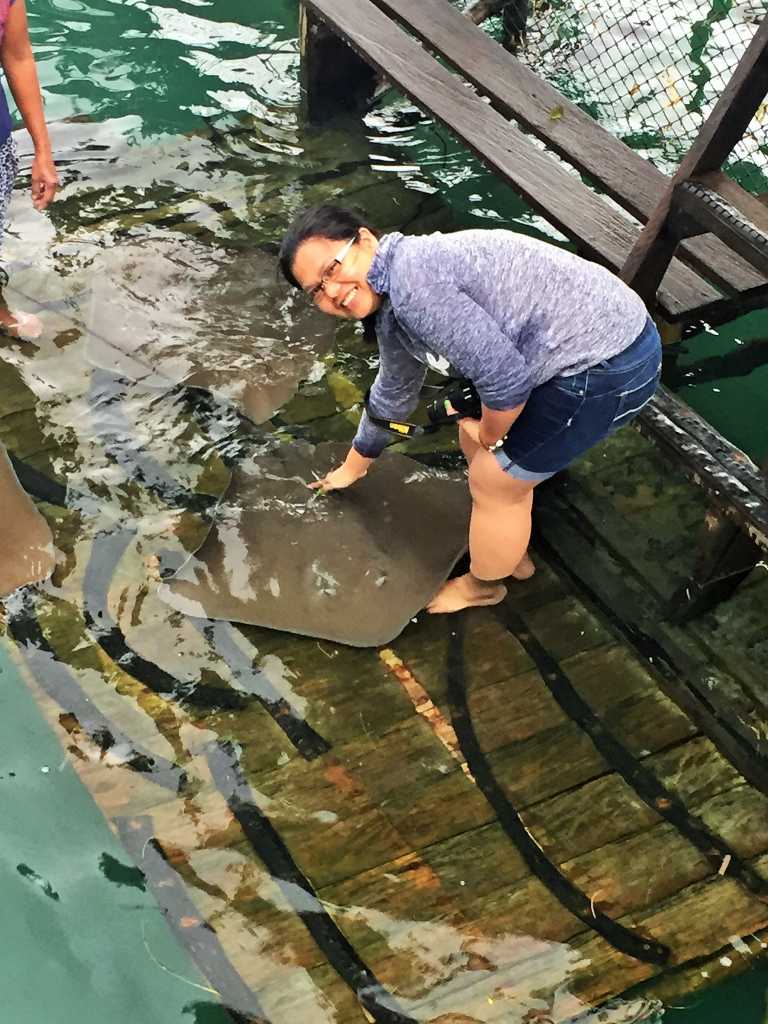 The most interesting part of feeding is getting a very close encounter with stingrays. With the assistance of the caretakers, you will be able to feed them with small fishes. Well, yeah, it looks scary at the beginning, but they are harmless because they are cultured but of course maybe not when challenged. 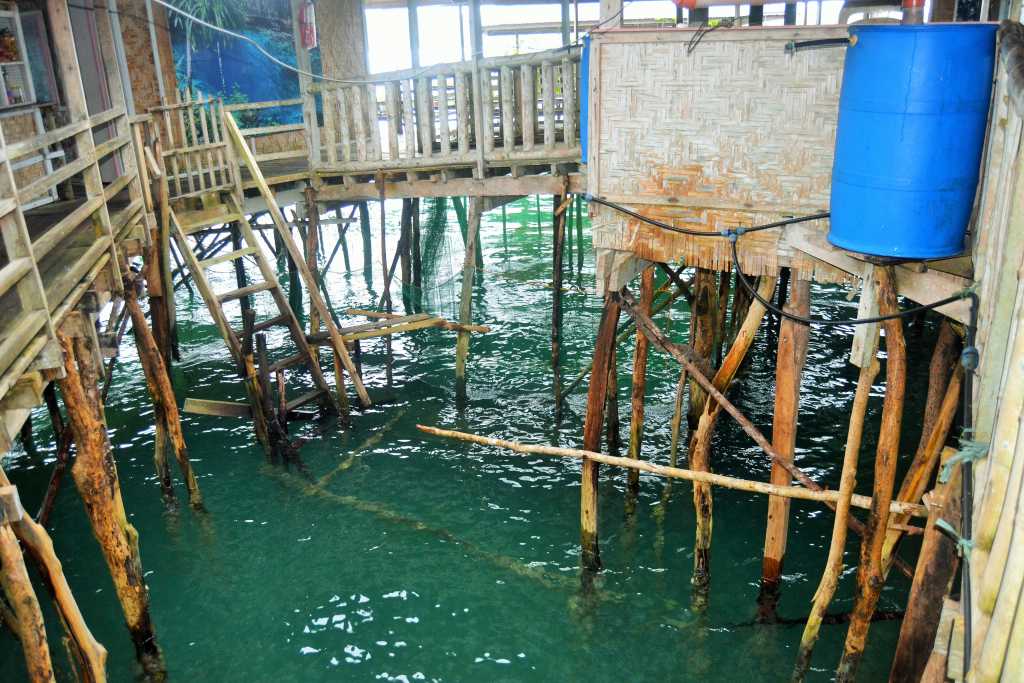 Untrusting the foundations that they used in building this resort in the middle of the sea, you won’t believe that they have rooms for rent which is ranging from PHP 400 to PHP 2600 and people do stay here for a night or nights. 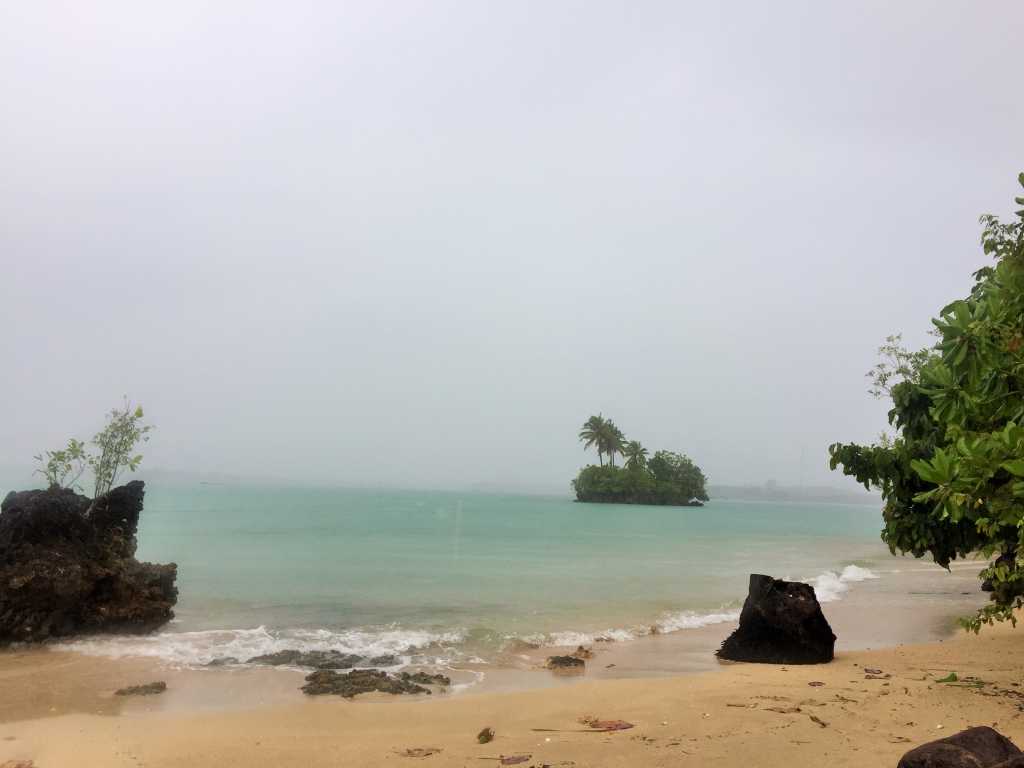 My next stop is Pacific View Resort, which is literally facing the Pacific Ocean. Paradise as it looked, this place is very silent when I arrived. Probably because of the unstoppable rain. The island is so ideal for relaxation as it resounds peace and beauty. 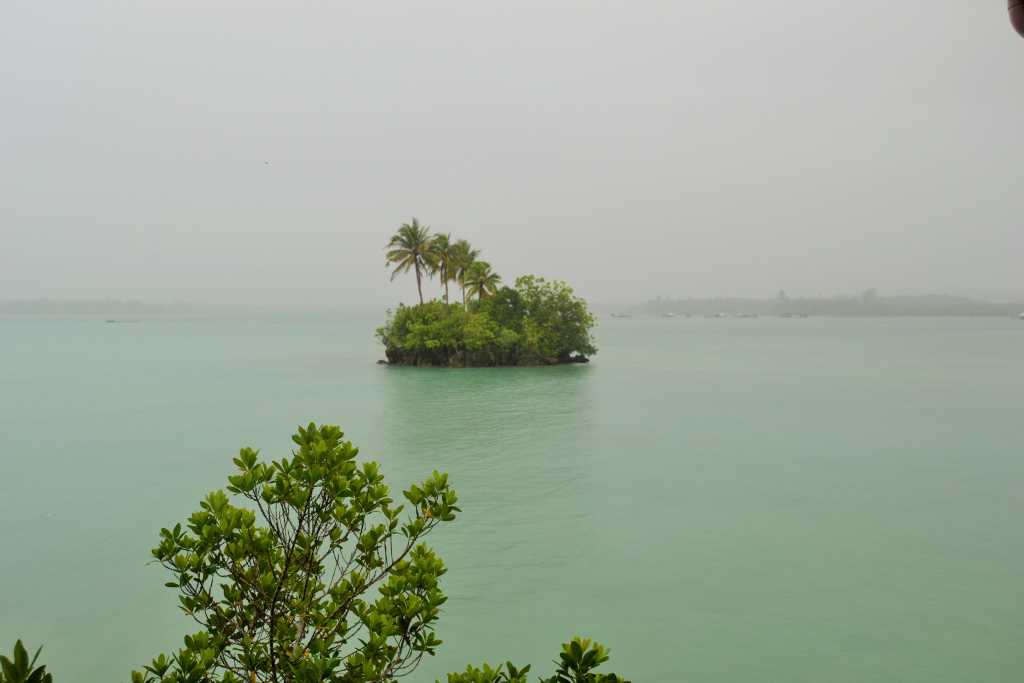 The last stop is called Sibadan. 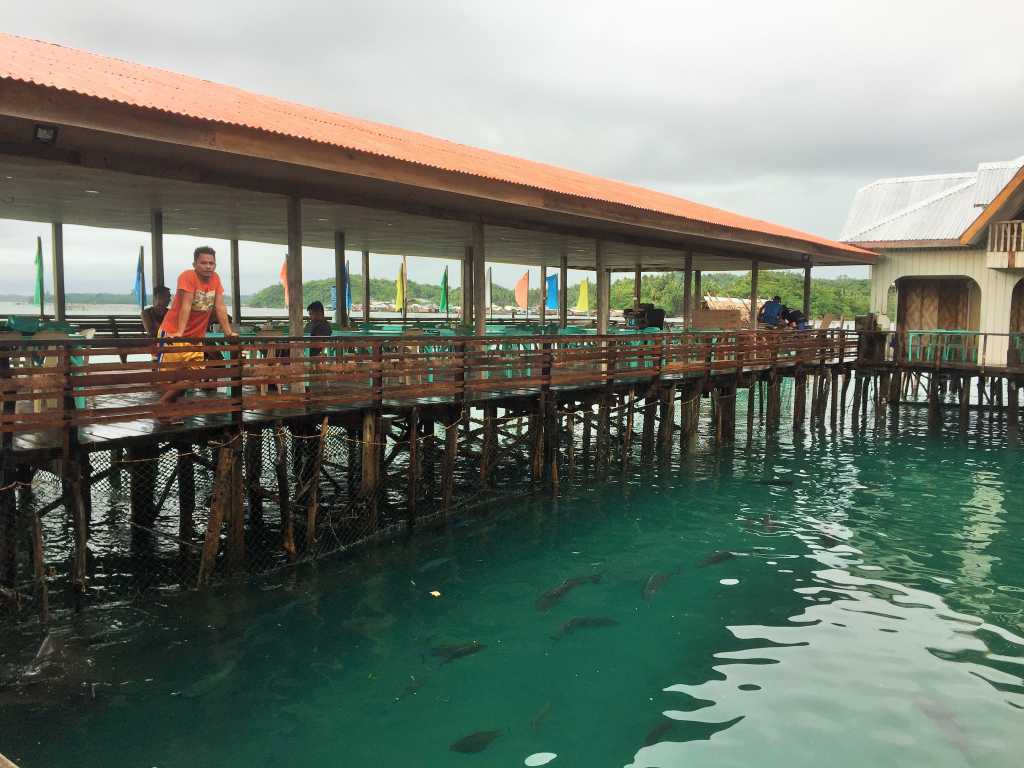 It also has fish cage and a restaurant where the biggest stingray is found. 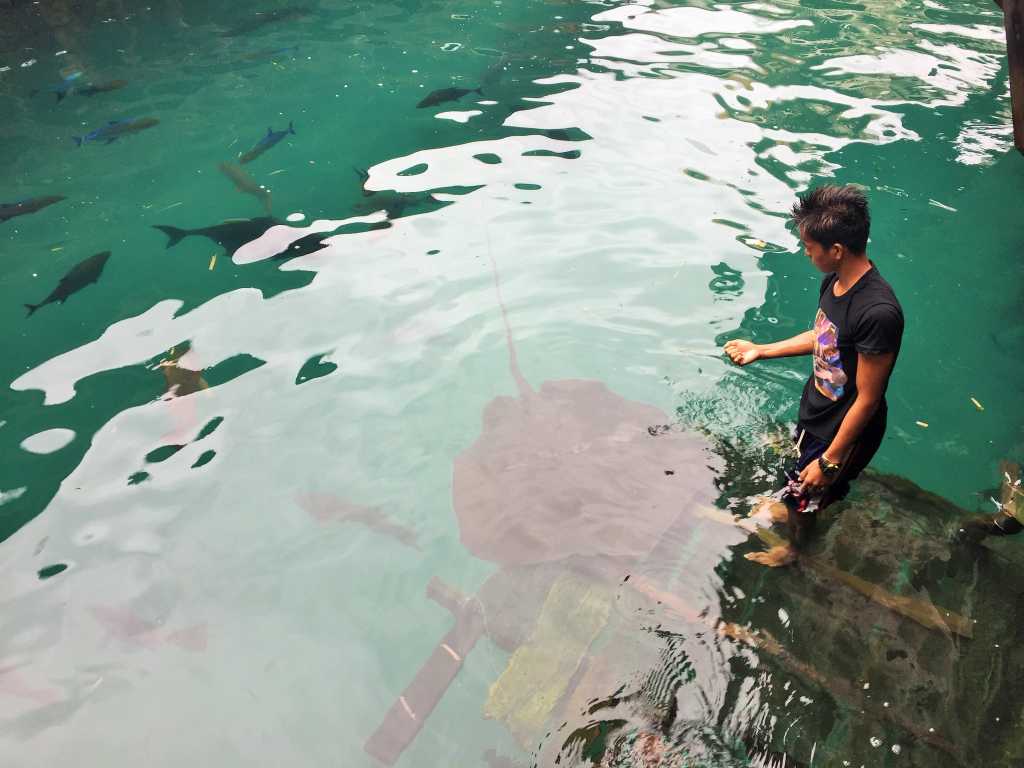 In Sibadan, you can stay for the night, eat an affordable meal, feed the fishes or swim with them. 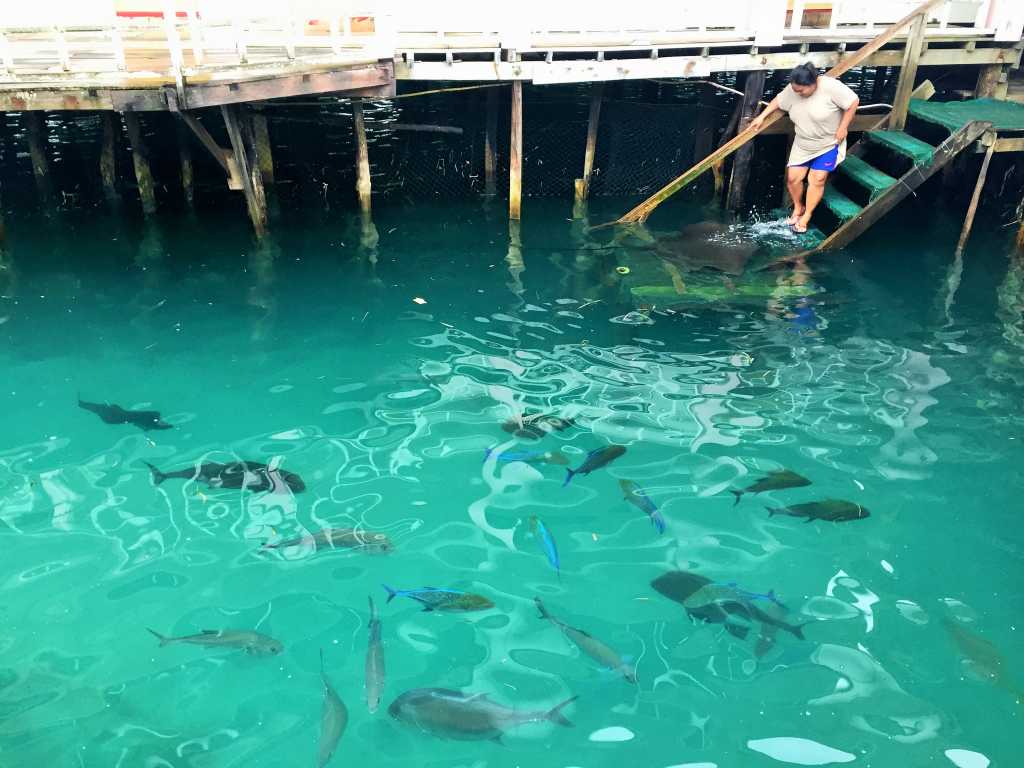 After the island hopping, I passed by the mirror lake on my way to Tinuy an Falls the next day. 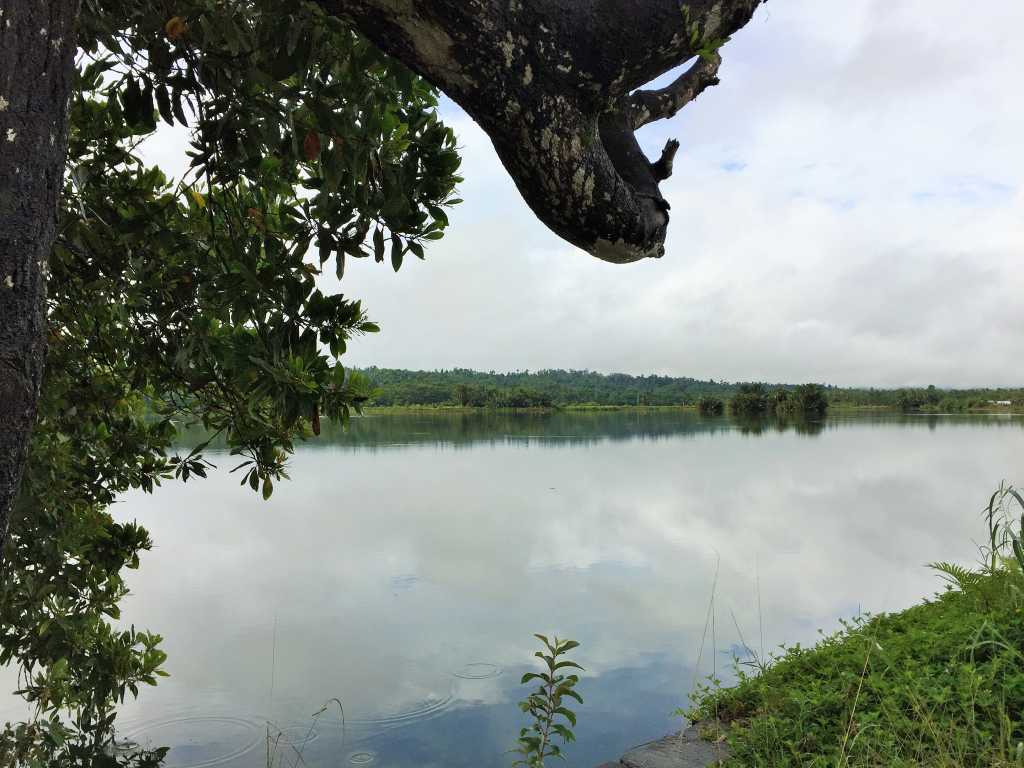 True enough, the lake mirror and reflects what is above and beside it. 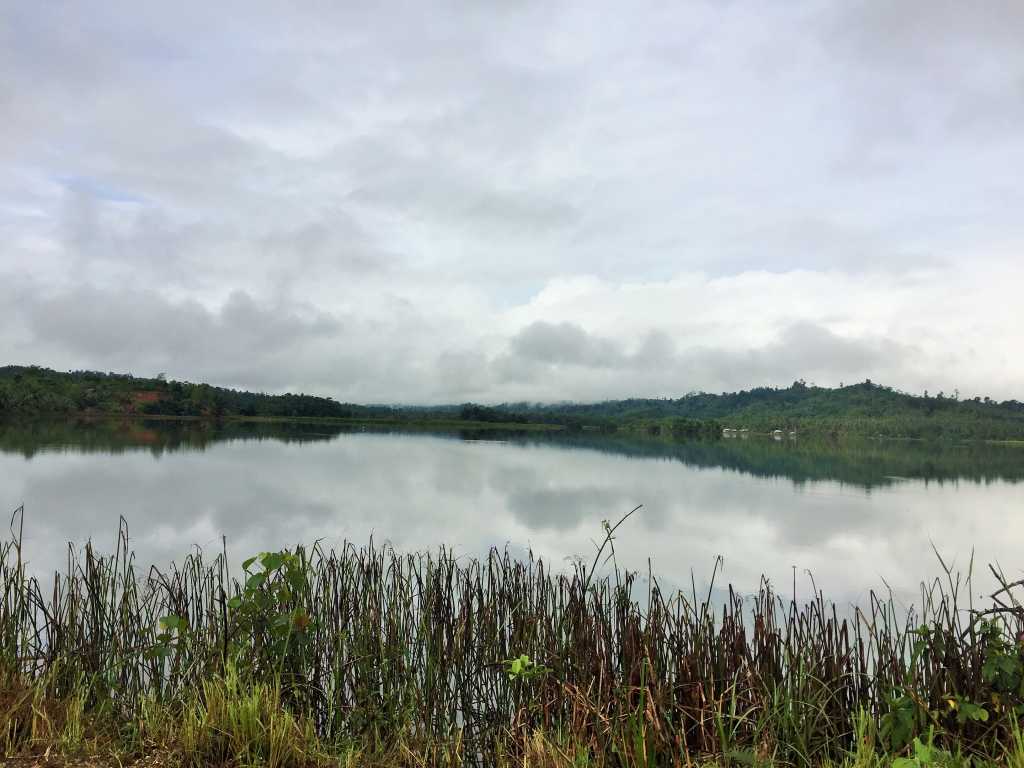 Reached Tinuy an Falls but was a bit disappointed because I did not see the rainbow that appears every morning and the water is very turbid because of the continuous rain that caused the flood. 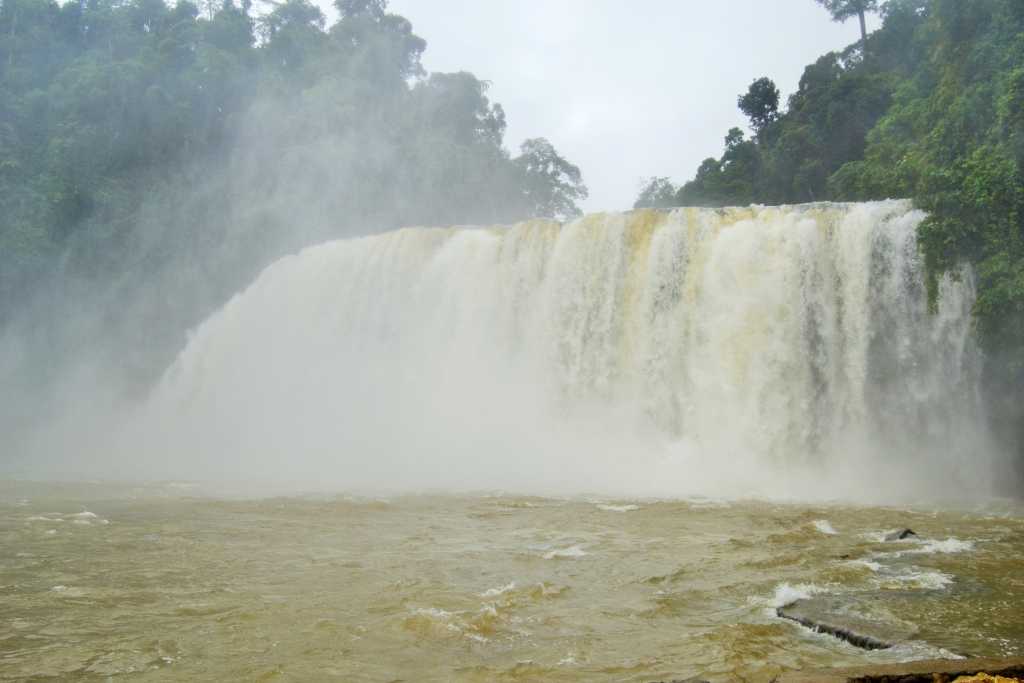 The Falls are in levels and is famous as the widest waterfalls in the Philippines. A tour guide brought me to the second level of the falls. Though it drizzled that day, I enjoyed the greenery and the steps going up. Because of the weather condition, we were not allowed to reach the third level. 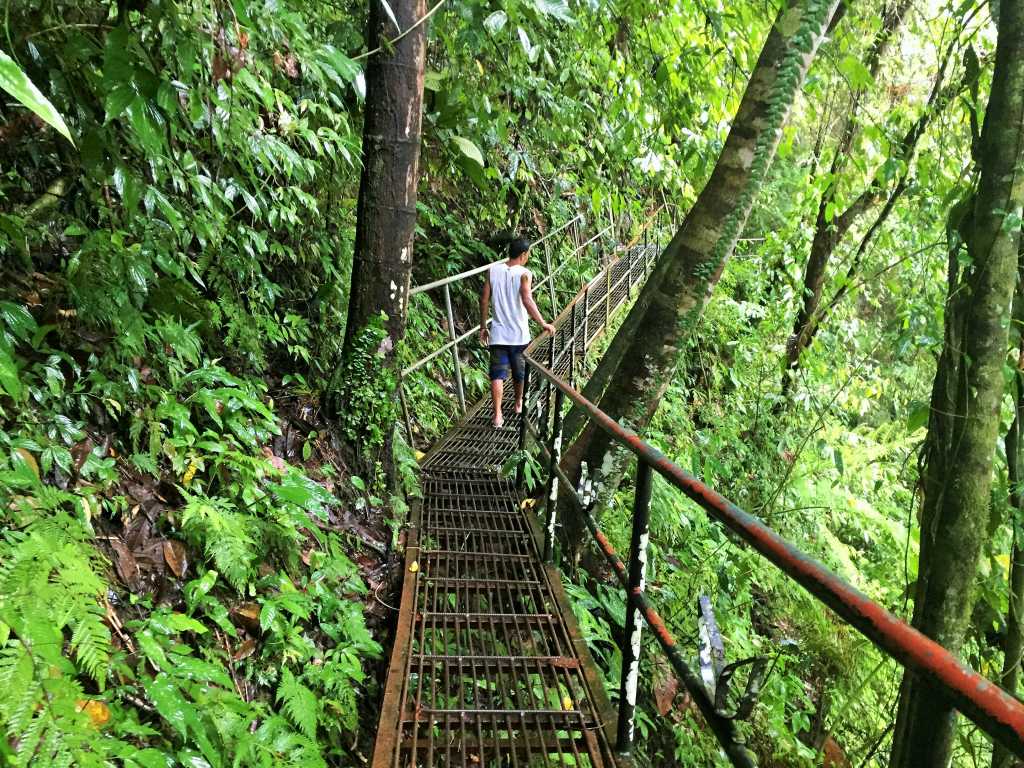 The weather may not be favorable when I visited, but that did not discount the beauty that I found in Surigao del Sur. 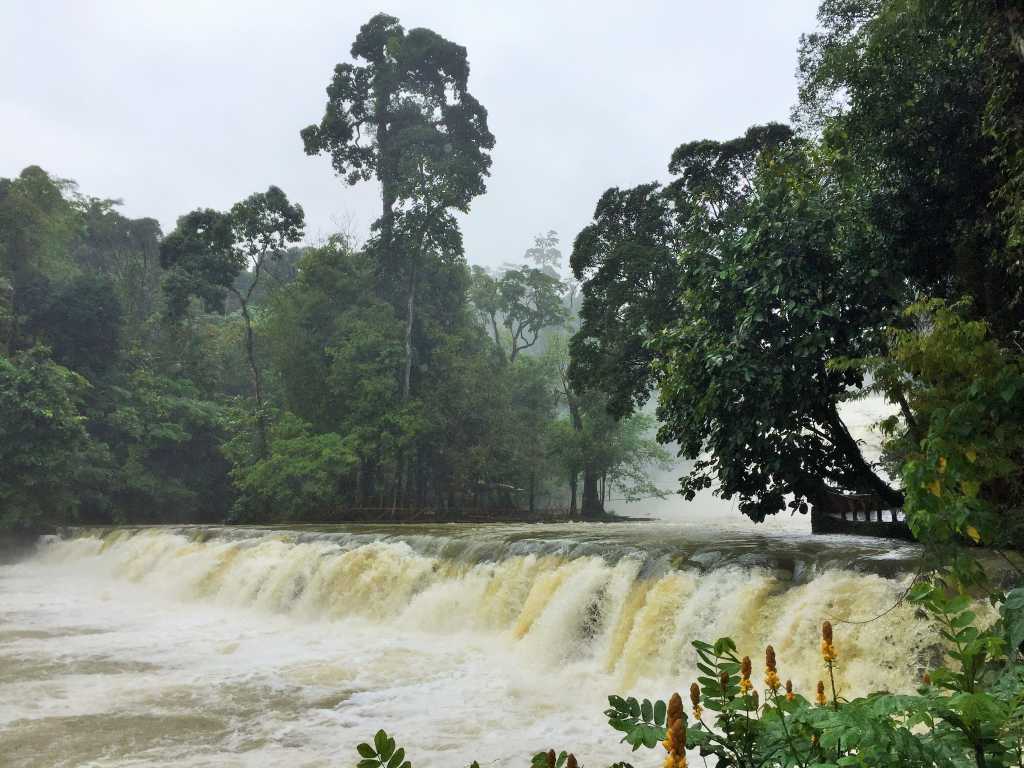 More are still there to behold and experience in the province of Surigao del Sur.  Aside from the fact that it is cheap, it is truly an enchanting experience. Go South! Go Mindanao!

Along with this is 10 free annual subscriptions of GPSmyCity. It is an iOS and Android app that features self guided city walks in over 1000 cities around the world. If you are tired and you take much time in planning your itineraries, this will answer all your needs. Each walk contains many attractions that has a detailed route map. What are you waiting for? Turn your mobile into a personal tour guide now! For more information about the app, log on to www.gpsmycity.com