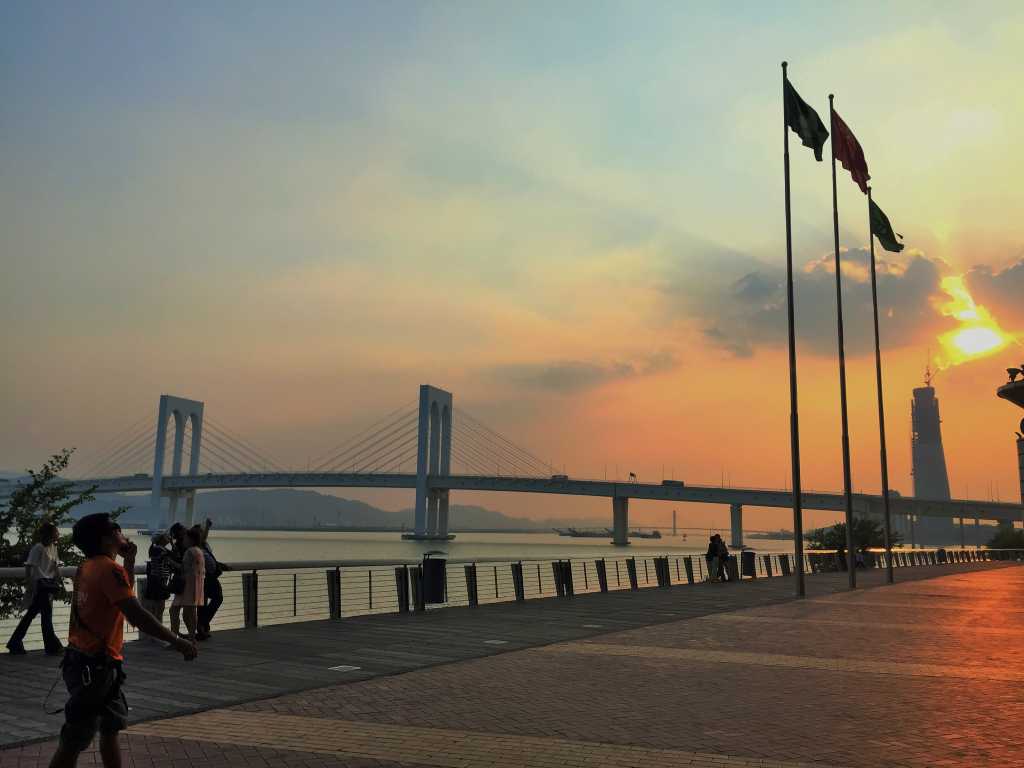 Why am I slowing down in Macau? Simply because my parents are with me.  Landed at night,  we were mesmerized by the scintillating lights of the city as we were traveling from the airport to our hotel. The city is literally dazzling and the playful lights entertained us that we don’t want to blink an eye. Mistakenly thought as separate from China, Macau is having a high degree of autonomy that is set by the People’s Republic of China. Hence, Macau is a Special Administrative Region of China. Allow me to say that Macau is extreme in both ends. Considered the Las Vegas of Asia because of the towering casinos around, it also homed so many churches around. 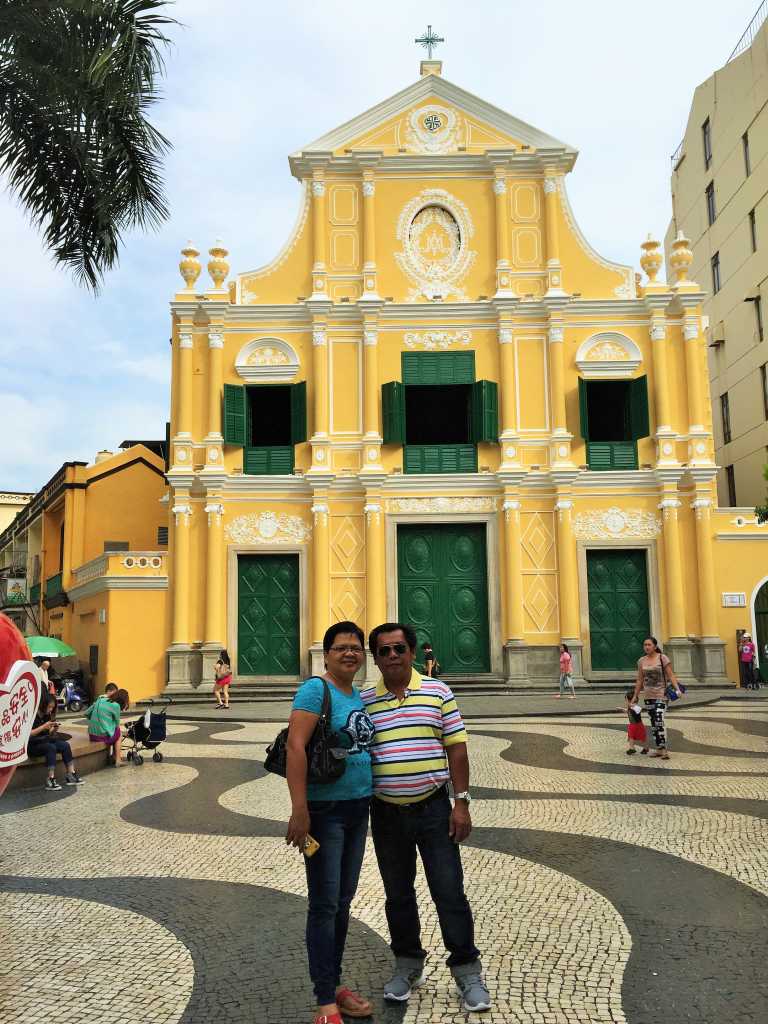 A ten minute slow walk from our hotel, we came across the St. Dominic Church, a UNESCO World Heritage Site which was built in the 16th Century and was run by the Dominicans. The church door is made of teak and its design is a mix of European and Macanese. 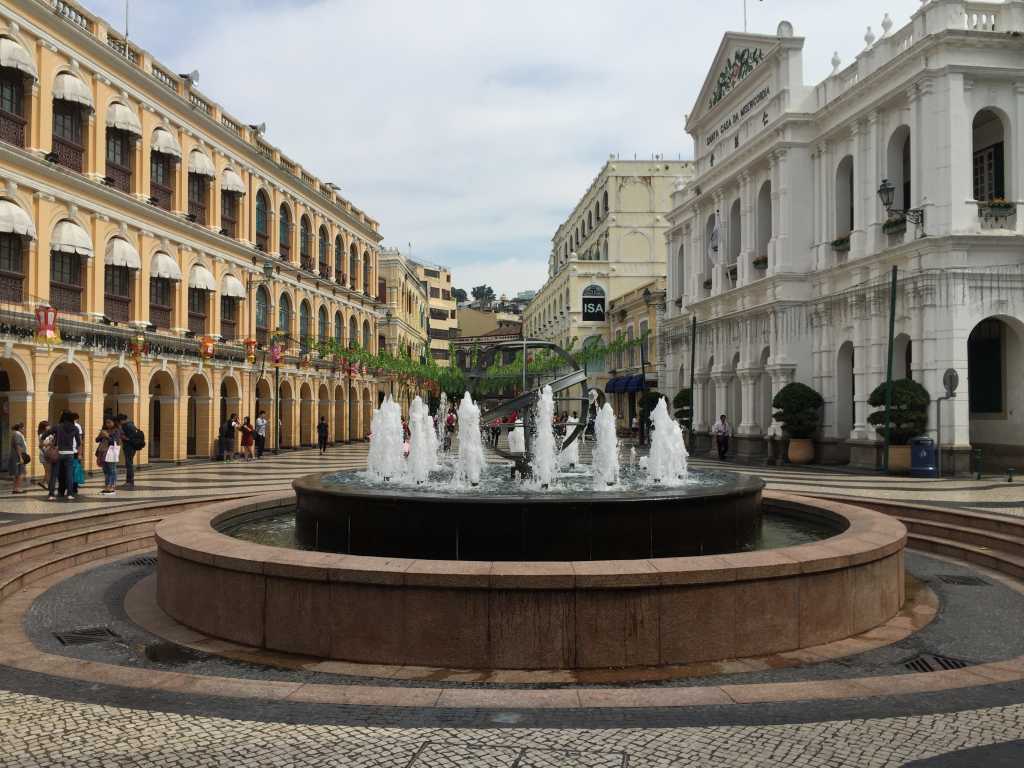 Very near the church is the Senado Square, a public square that is actually triangular in shape where many of Macau’s events were held. It is a vibrant place where nearby you can access fast food, restaurants, money exchange and banks, information center for tourism and different shops for your shopping needs. This place has different energy during night and day, so it’s best to check both. 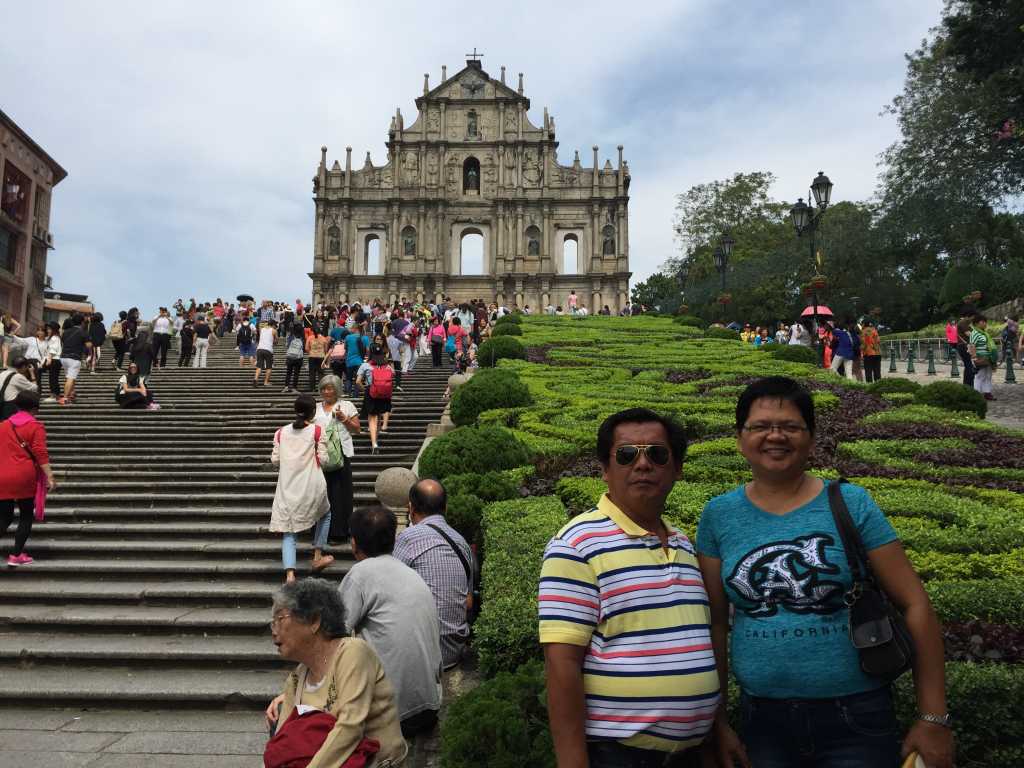 Heading North, you will see the famous Ruins of St. Paul. Walking towards the ruins cannot be boring as you will be busy with all the food tasting along the road. Visitors are so busy checking shops along the way that they won’t be able to notice that they already reached the ruins while the vendors are also taking their time in selling their products. 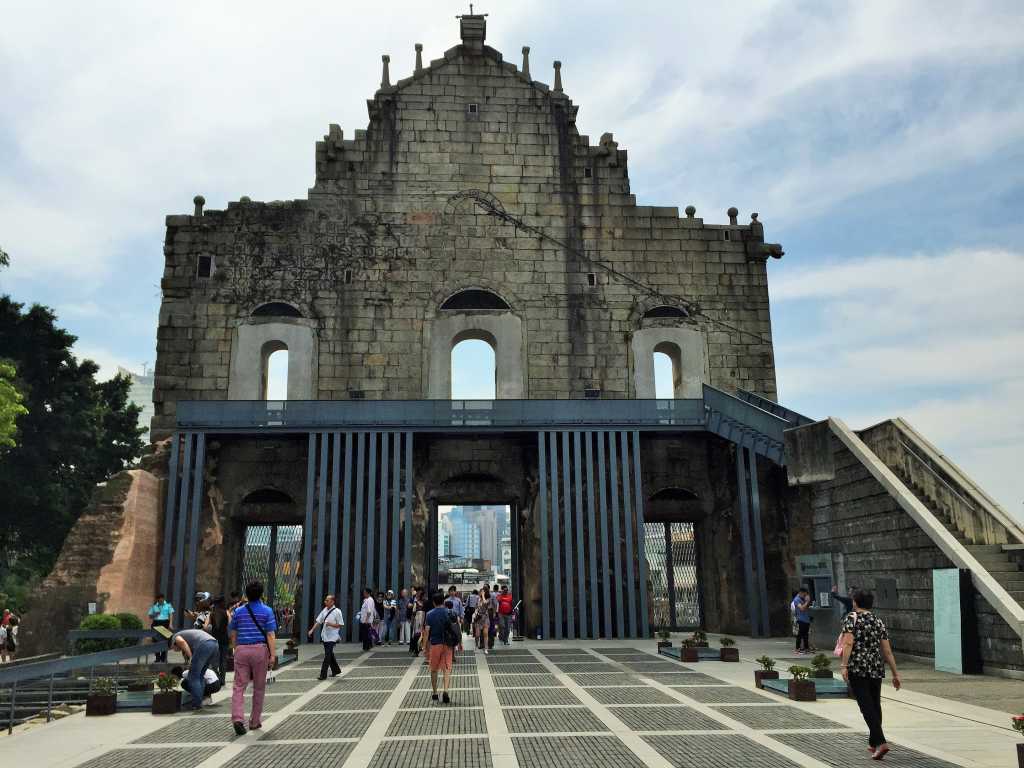 Have you ever wondered why it’s called the Ruins? The used-to-be church was established in 1580 and encountered three fire incidents, in 1595, 1601  and in 1835. The latter one is the most destructive, leaving only the main façade and foundation of the church. 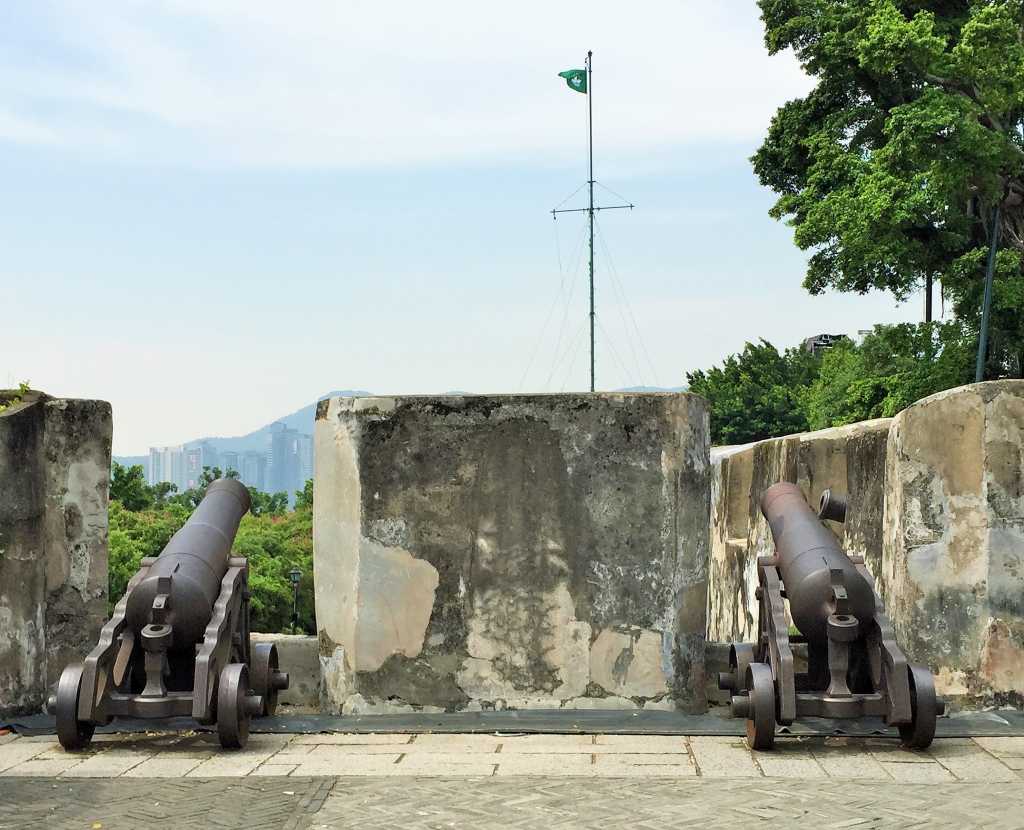 Out from the Ruins, you will see the Fortaleza do Monte, again a UNESCO World Heritage Site. Situated on a hill and 52 meters above sea level, you have to climb all the way up by the stairs to see it. Built by the Jesuits, it is the principal military defense, preventing them against any attacks from the sea. 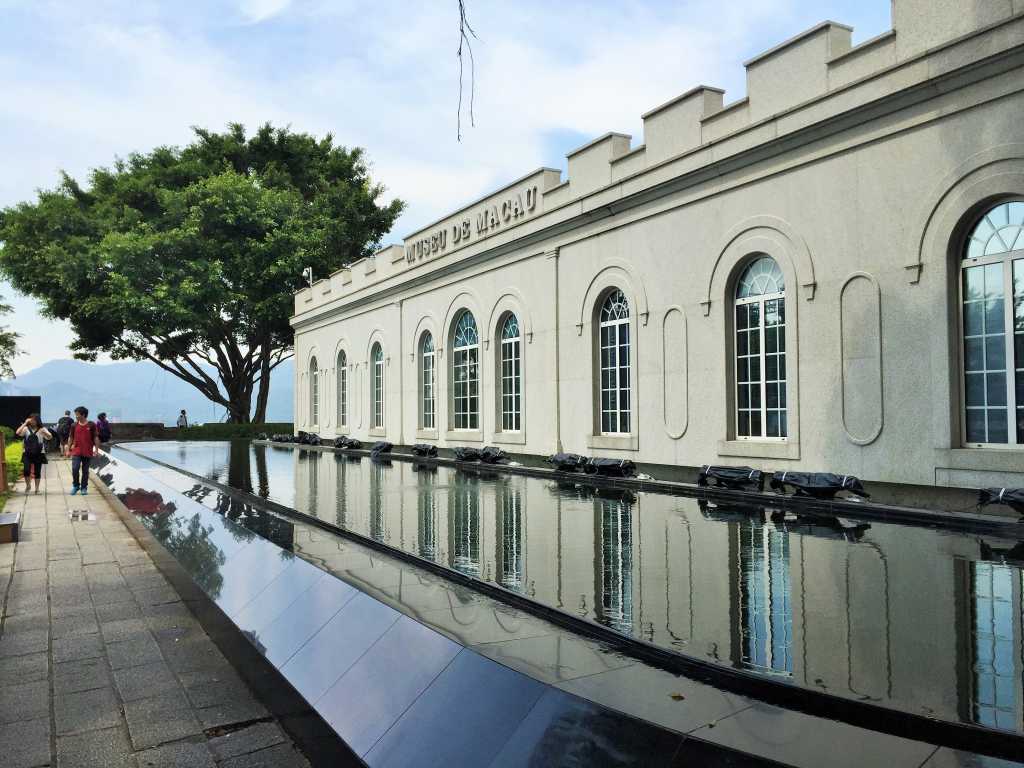 In 1998, Museu de Macau was built on the same hill, a few steps away from the fortress. It showcases the history of Macau and the Portuguese colony in Macau. It is a three story building which first and second floor are below the ground. At the side of this Museum, you will get a good overview of Macau. The area is wide and you will find many benches around that will allow you to rest and enjoy the view. 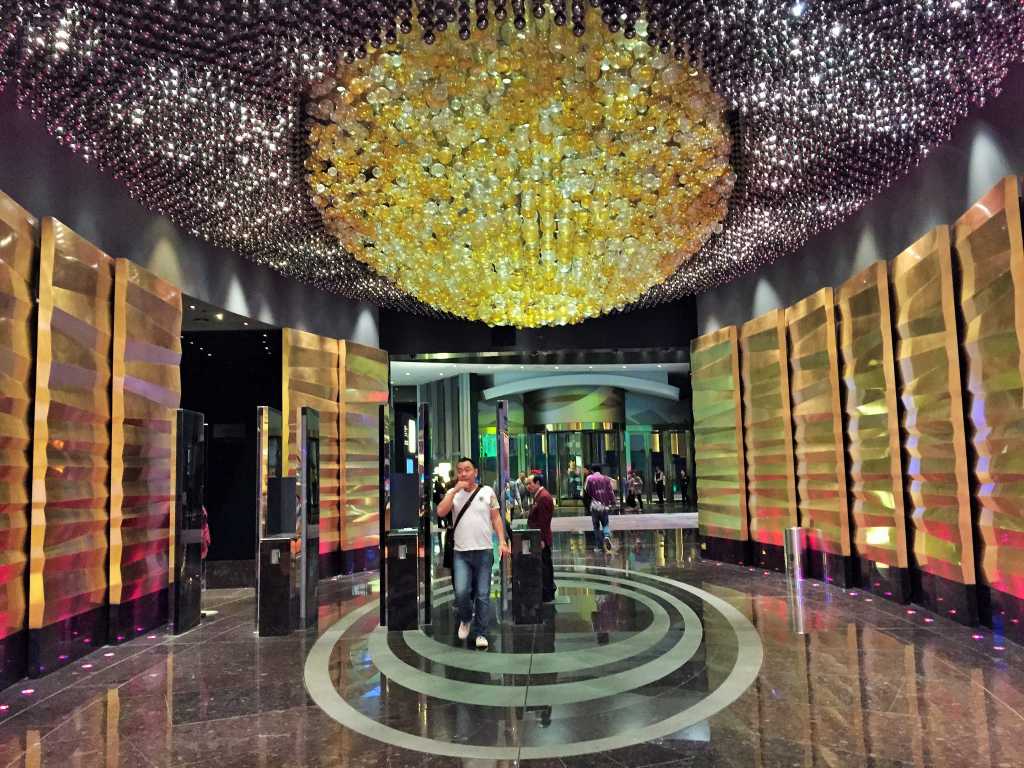 We rested for a while, took our dinner and visited the City of Dreams, a luxurious leisure destination that has hotel, spa, shops, restaurants, casino and entertainment.  The house of dancing water which we unfortunately missed is also performed here. 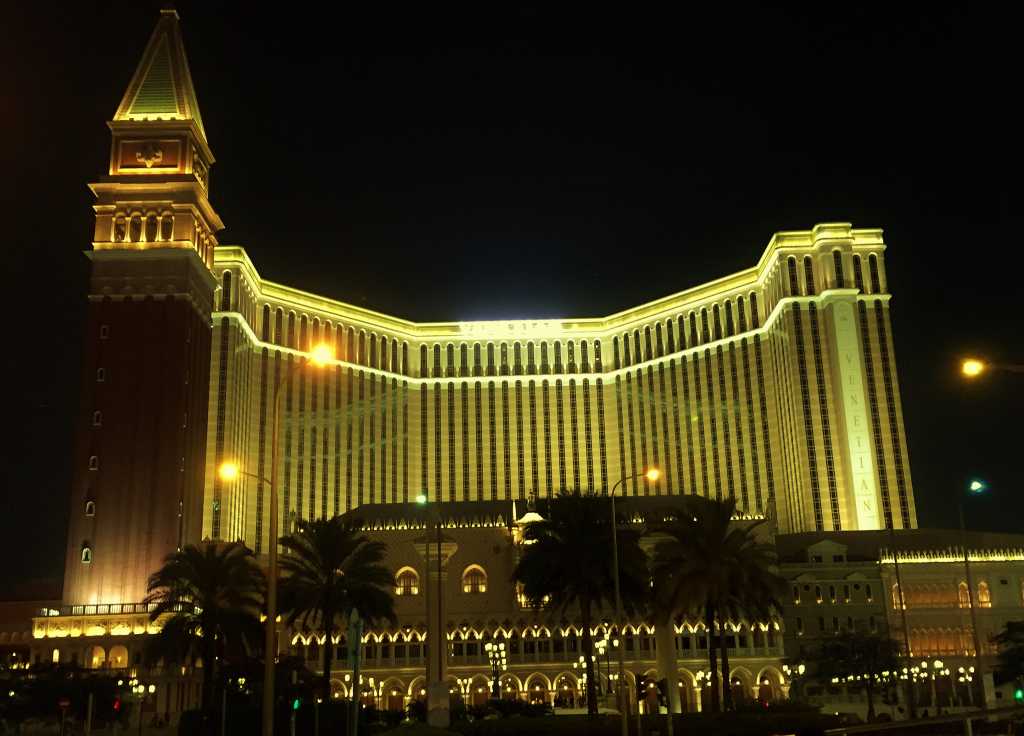 Our next stop is the Venetian, again a luxurious hotel and casino resort in Macau. Like the City of Dreams, this is also a one stop amusement place where you can dine, shop, play and be entertained. 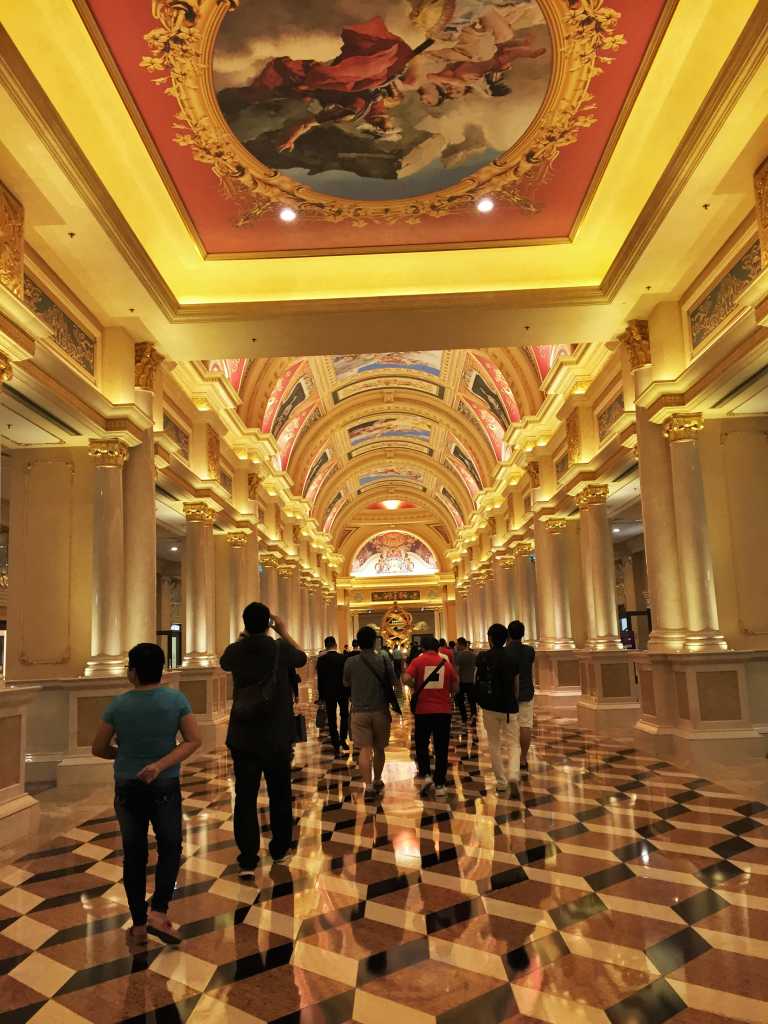 What is remarkable here is the Venetian architecture that is very evident in both the interior  and exterior of the resort. The celestial theme in the colonnade, the distinct existence of gold around,  the painted ceilings, the metallic edges and moldings are embedded in every corner and surface of the resort.  Walking along would make you feel that you are exactly in Venice. 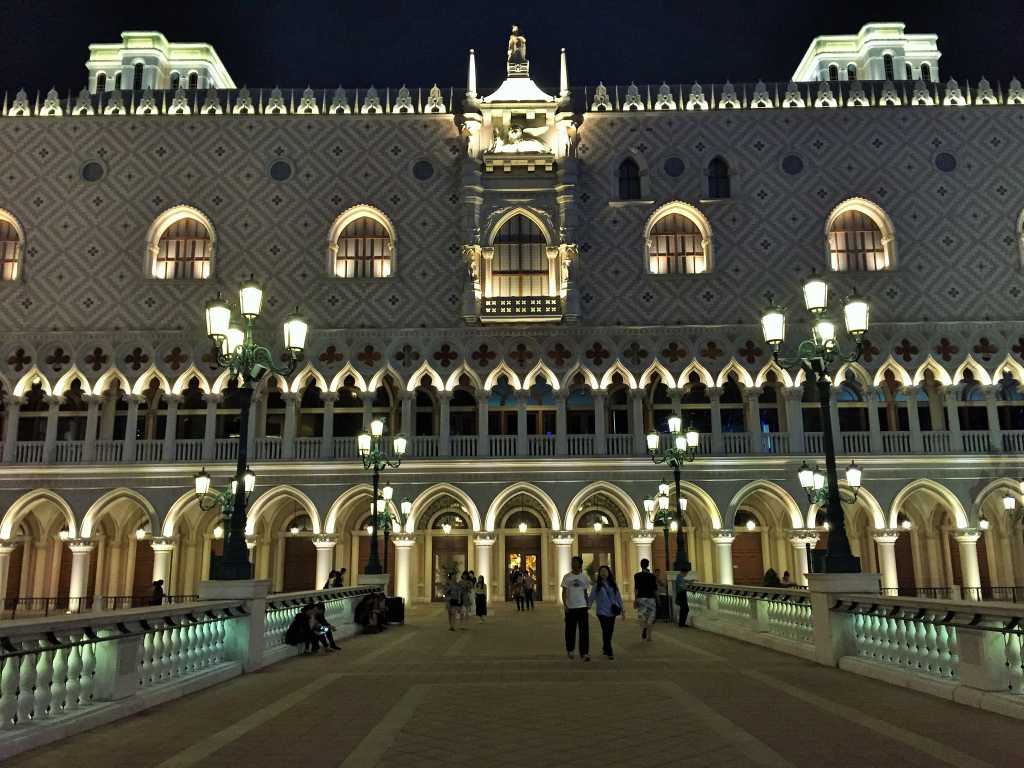 Inspired by the famous city, experience the romance of Venice by taking a serene gandola ride along the Grand Canal. 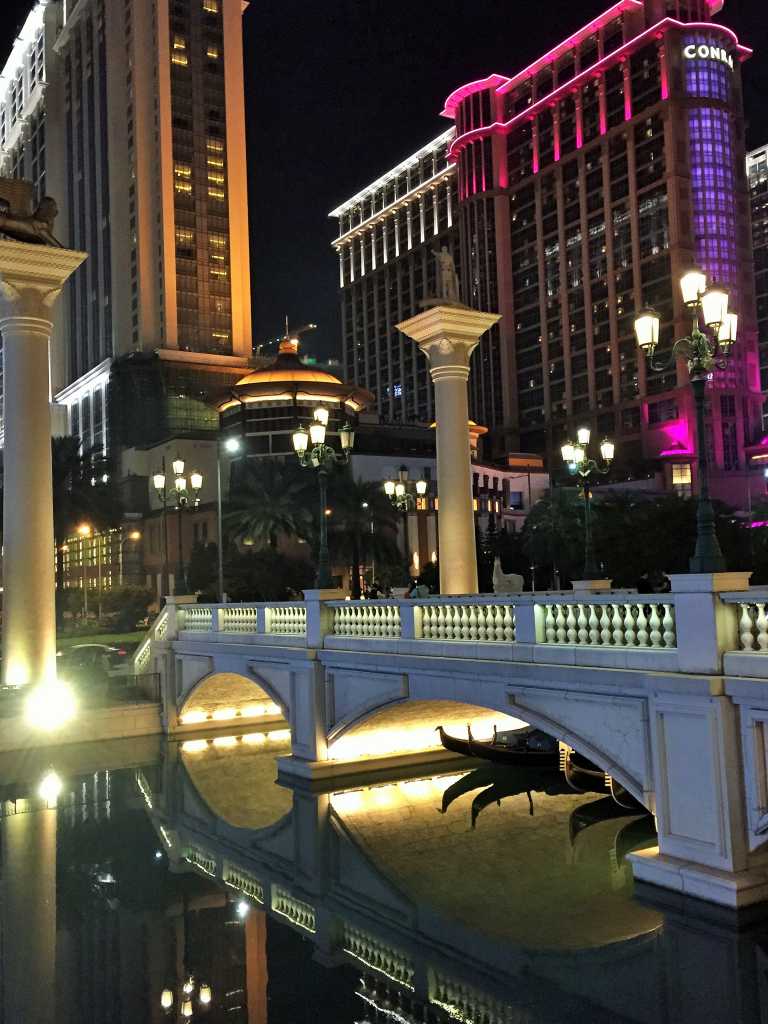 Our next day started at St. Anthony’s Church which was built in 1560. Famous for wedding ceremonies, this Church is called Fa Vong Tong in Chinese, meaning Church of Flowers. Apparently, there was a notification at the gate informing that they are close for the day. Sadly, we were not able to enter and discover why it’s called the Church of Flowers. 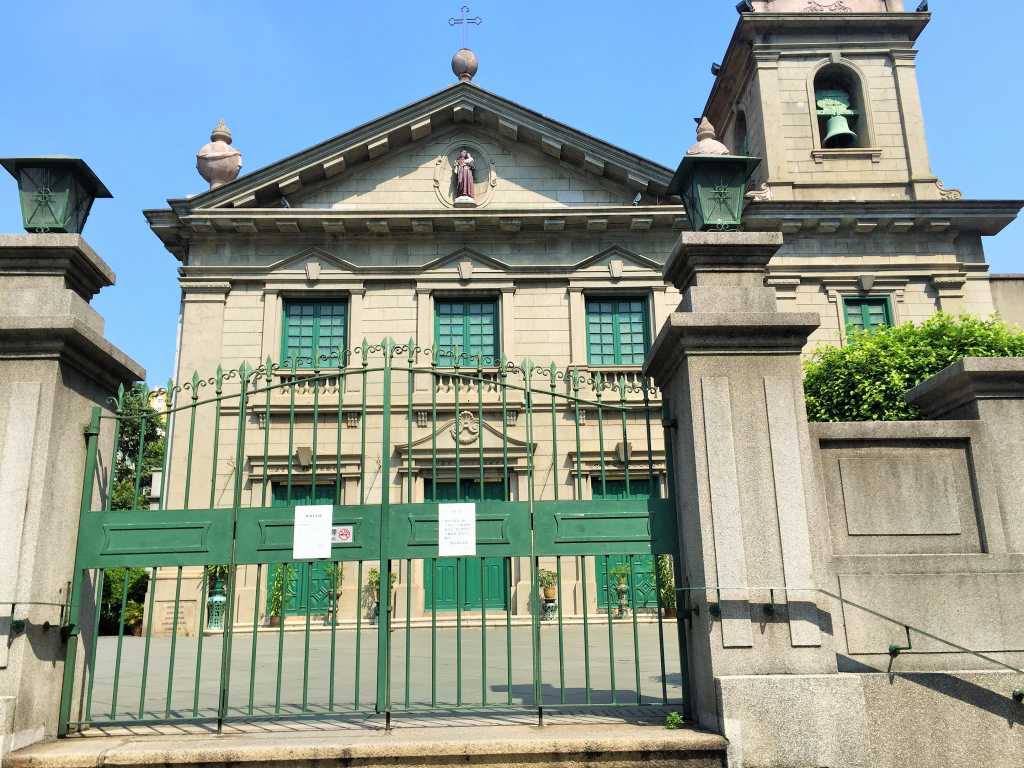 Built in 1488, A-Ma Temple is said to be one of the oldest temples in Macau that is built for the goddess of the sea. It is believed that the Portuguese derived the name Macau from this temple. 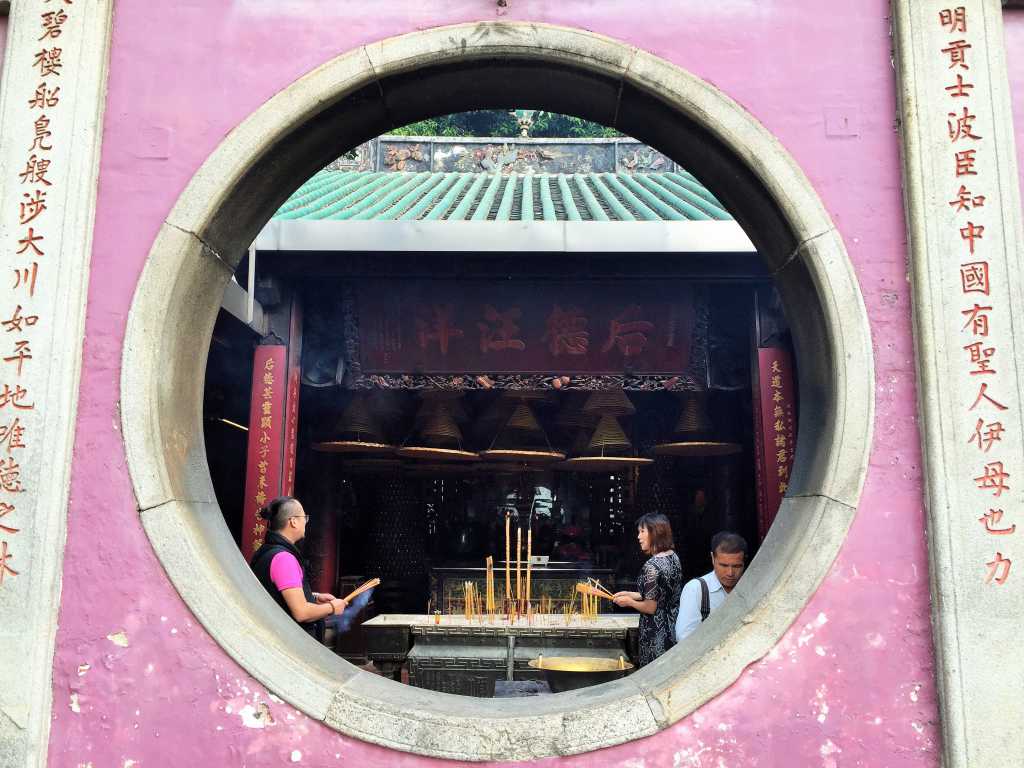 We then visited the St. Lawrence Church, one of the three oldest churches in Macau, which was built in the sixteenth century by the Jesuits.  Families of Portuguese sailors used to come here and pray while waiting for their loved ones return. 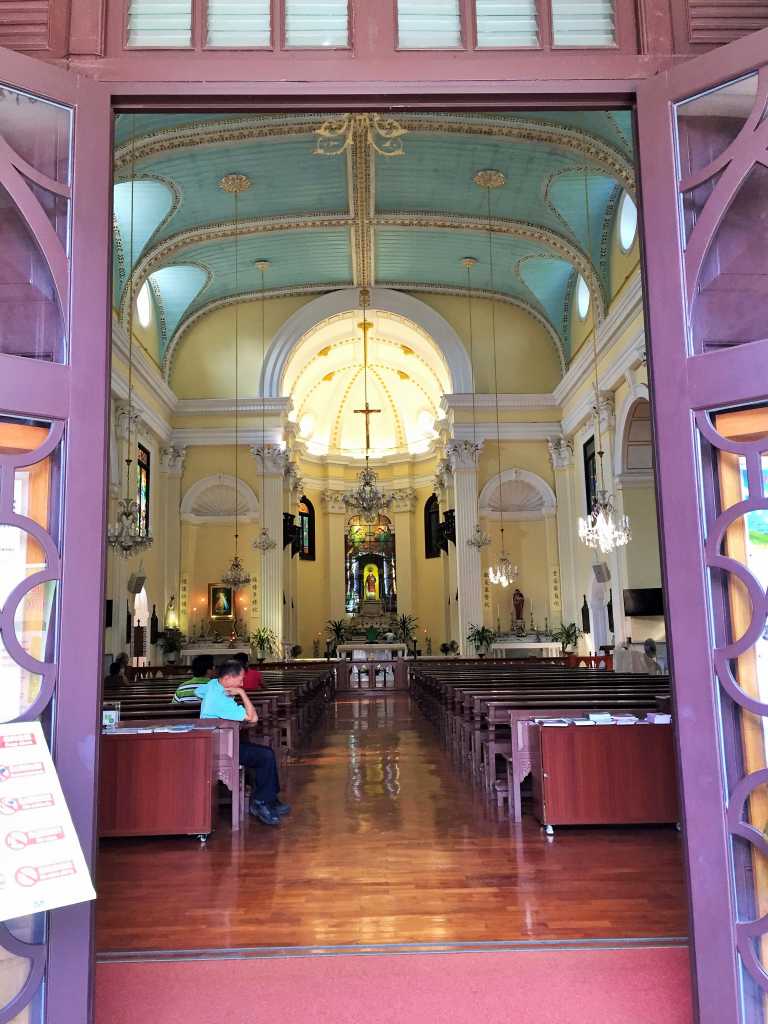 The Macau Tower Convention and Entertainment Centre is our next stop.

This is also the place where the world’s second highest bungee jump is located, the Macau Tower. Exciting as it was, we spent quite some time here as my father who was already tired from walking enjoyed watching brave individuals jumping 233 meters high. 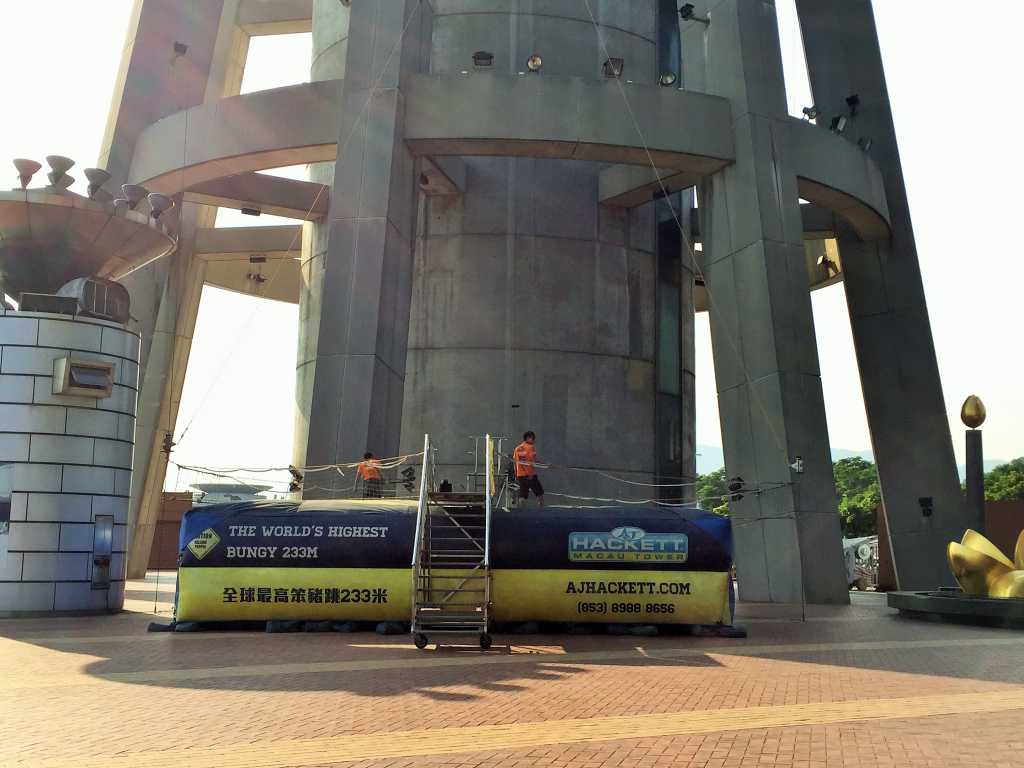 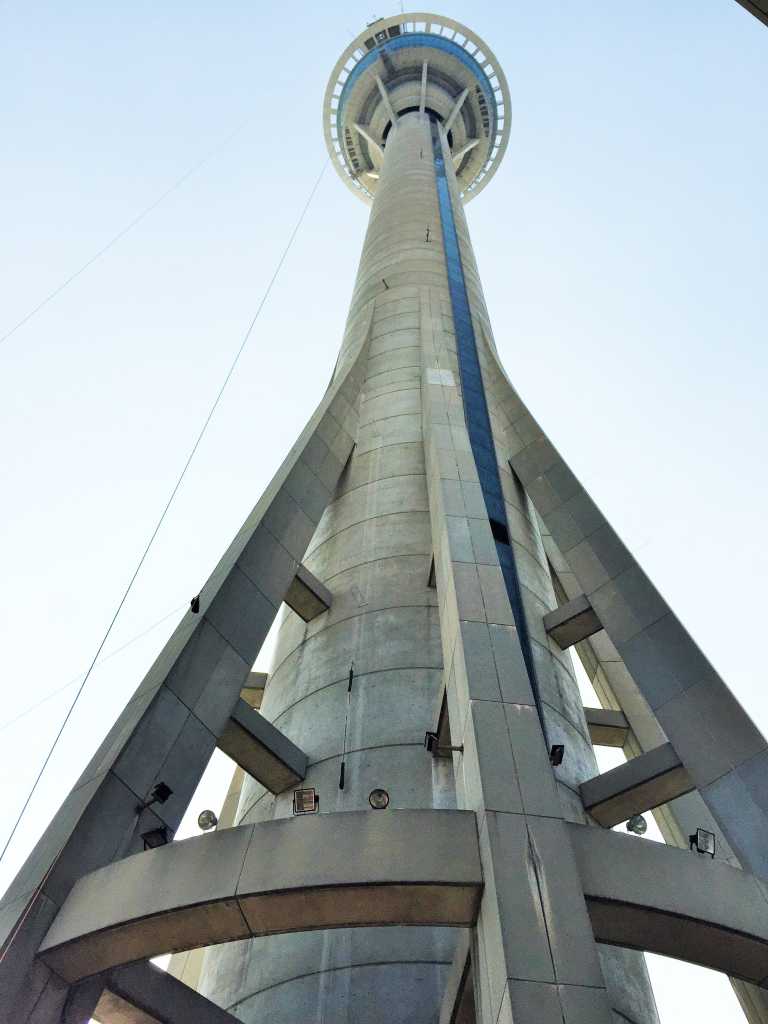 Macau is not so big when it comes to area but so intact with everything. From praying to playing and history to technology, Macau bridged the gap between an old to a modern city. Having two official languages, Cantonese and Portuguese, Macau is blended with diversities that enrich their lifestyle, culture, food, people and the like.

It is almost an hour away from Hong Kong by ferry. So if you intend of visiting Macau, Hong Kong is a side trip that you couldn’t afford to miss.

ABOUT US
We wanted to inspire and change people’s perspective about countries. Many are still imprisoned with the wrong set of preconceived ideas and of course ideology. We wanted to create that desire in you to see and experience people because only by then that you will know. Act on your wonders and allow your feet to bring you there! That’s The Wondering Feet's Calling!
Contact us: [email protected]
FOLLOW US
© Copyright 2020 - Created by The Wondering Feets Calling