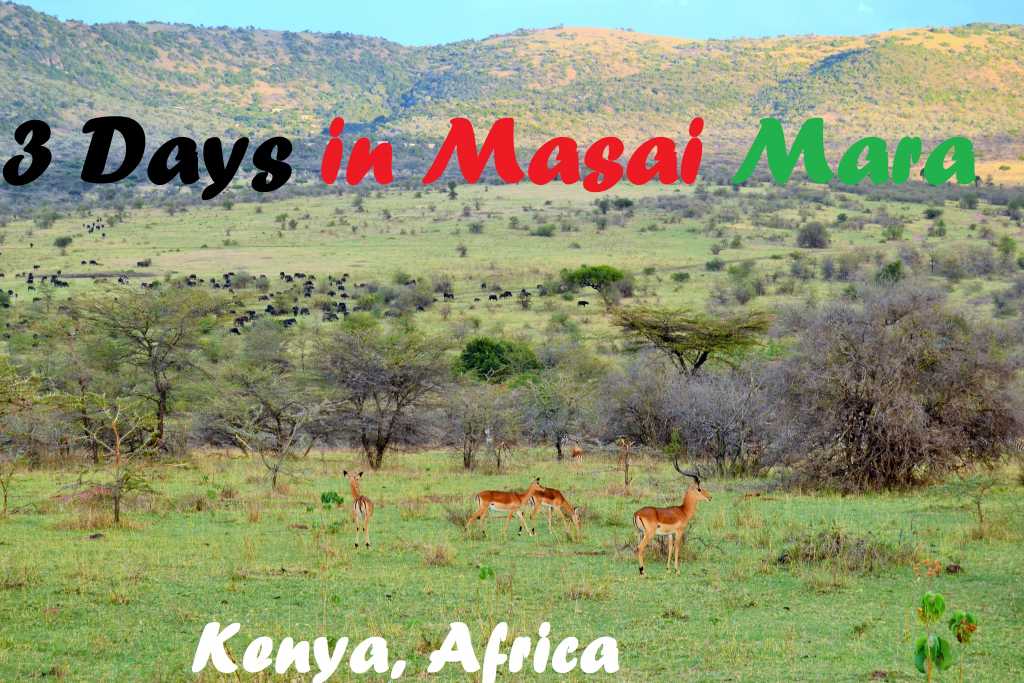 Jambo! Our 3-day-Safari Experience in Masai Mara is incredible!  The game ride is a combination of thrill, fun and wonder. Admit it, when someone is heading to Kenya, the Masai Mara Reserve is on the top list of places to visit. The land is named after the Maasai tribe who dwells in the area while Mara means “spotted”. The Masai Mara is a savannah that  is spotted with animals, trees and cloud shadows. The park area is 1510 sq.km and 298 kilometers away from Nairobi. 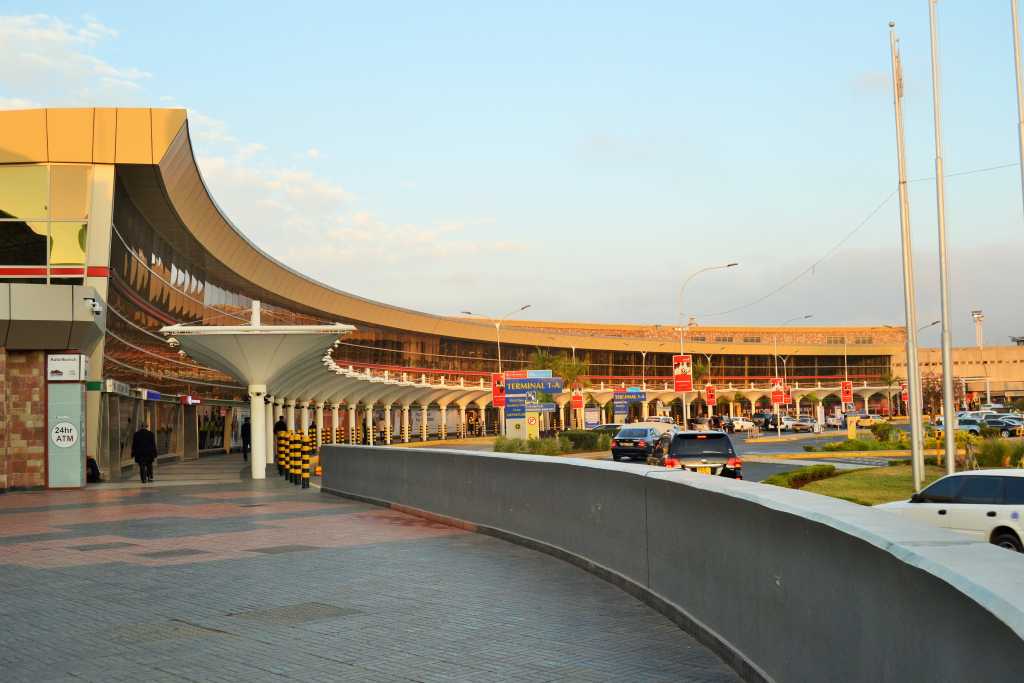 We landed at Jomo Kenyatta International Airport early morning and went straight to Masai Mara to start our Day 1. We had our lunch in Narok and the rest was a long, bumpy and dusty ride until we reached the camp at 04:00 in the afternoon. We just leave our luggage in the tent and started the Game Ride at around 04:30. 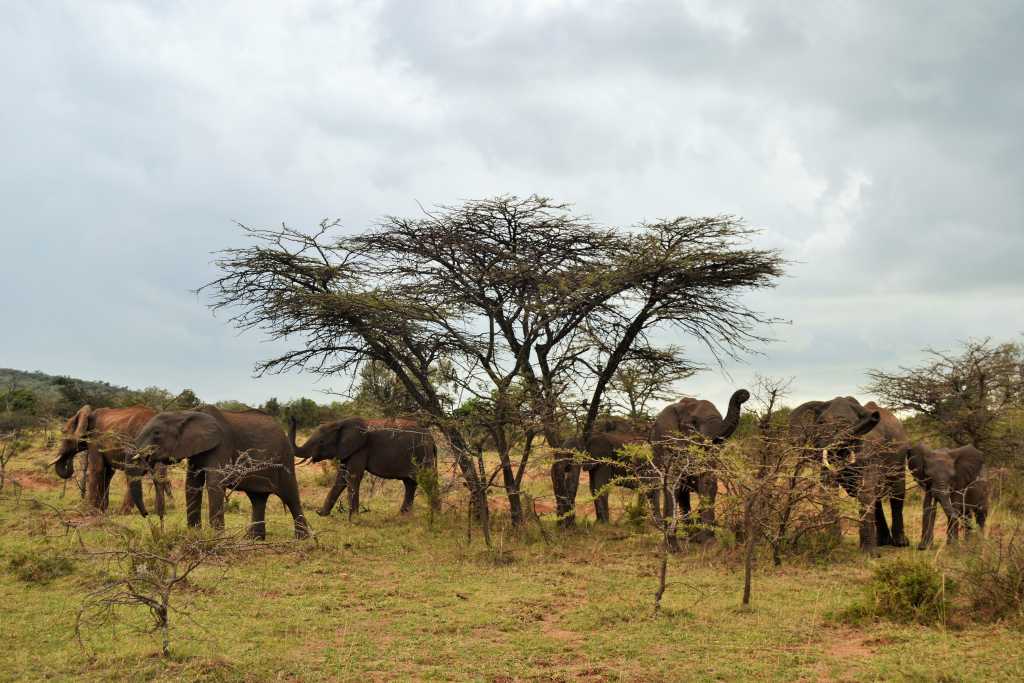 Our entry to the reserve was welcomed by a parade of elephants. The amusing part of seeing animals in families and coming together as one is soul-inspiring. 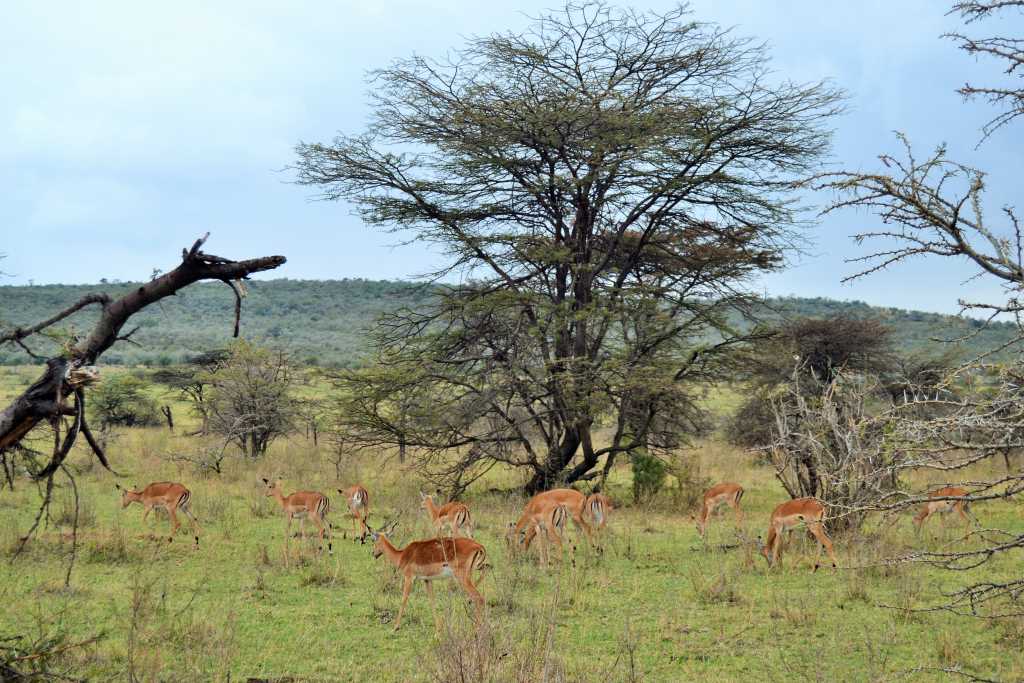 Right this time, I admire the keenness of our driver in knowing where these animals stay usually, though I understood that doing it every day would make him an expert. 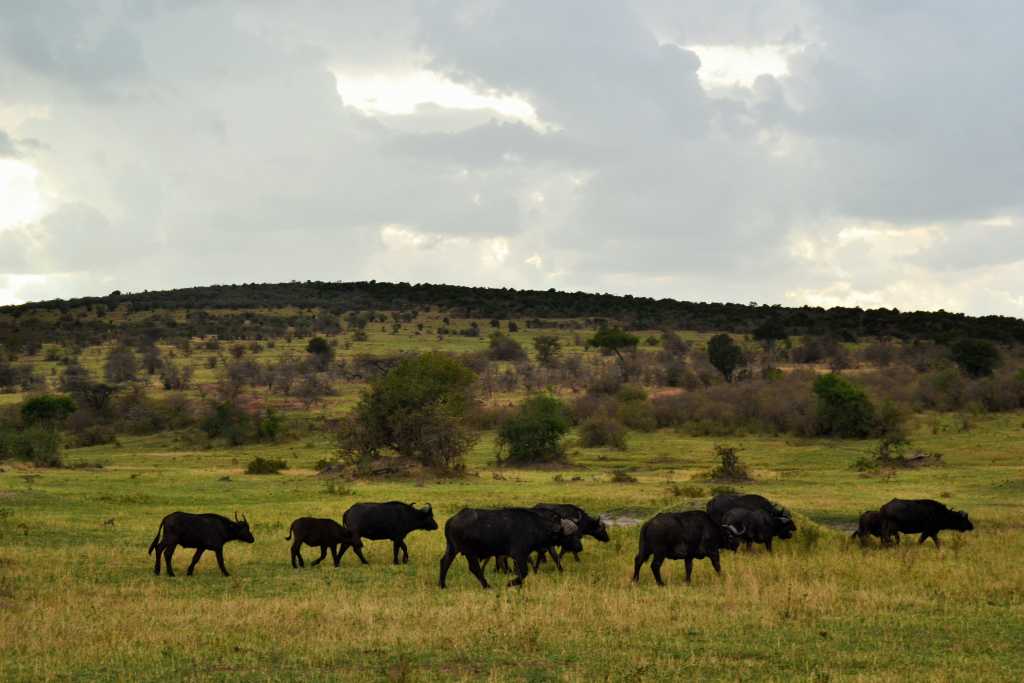 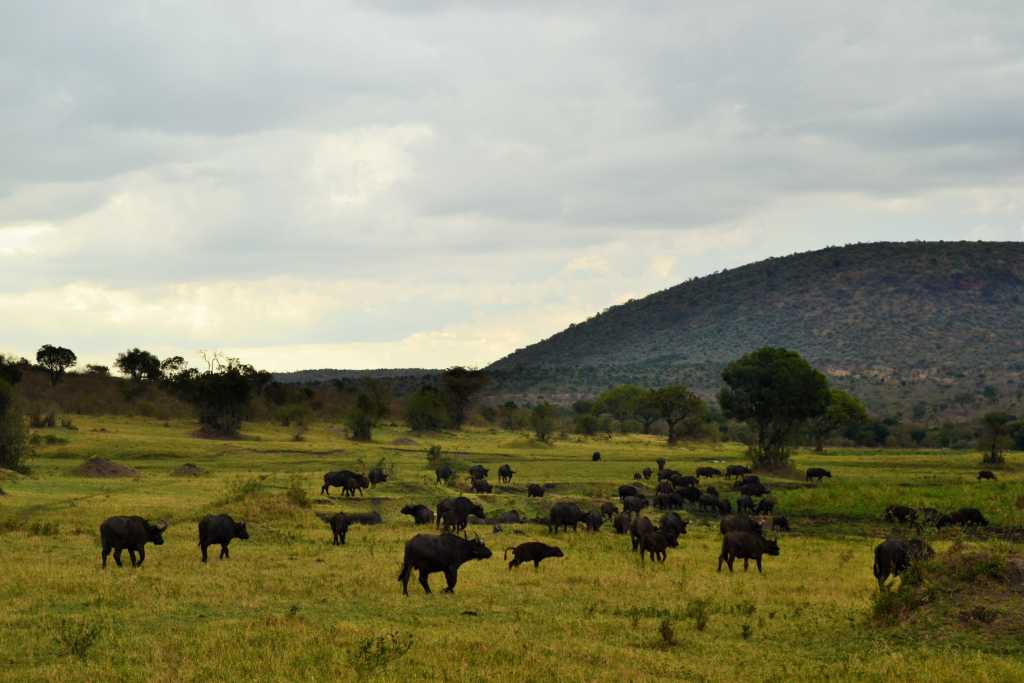 The stillness of the vast, open green grassland was interfered when a gang of fat buffalo crosses the street. As we continue,  a tower of giraffe had again caught our attention and silent us in awe as we waited for another set of wonder to unfold. 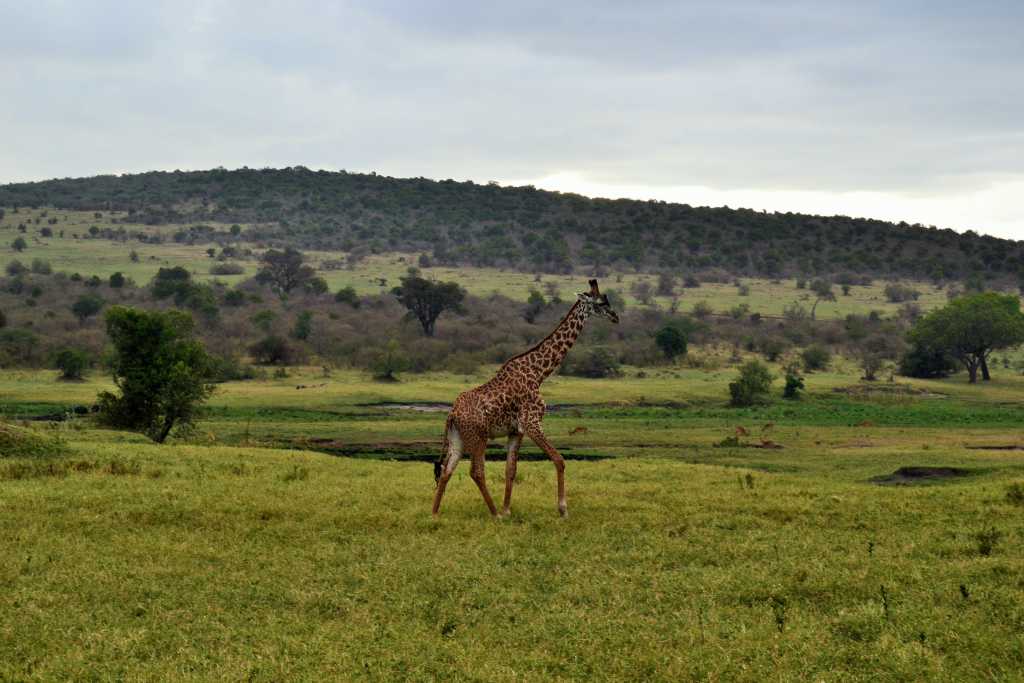 The sun started to set and the orange rays started to invade the land while it back-dropped the hills which is dotted by thorny trees. Zebras also walked their way on a golden grass making their white and black color stood up and more evident. 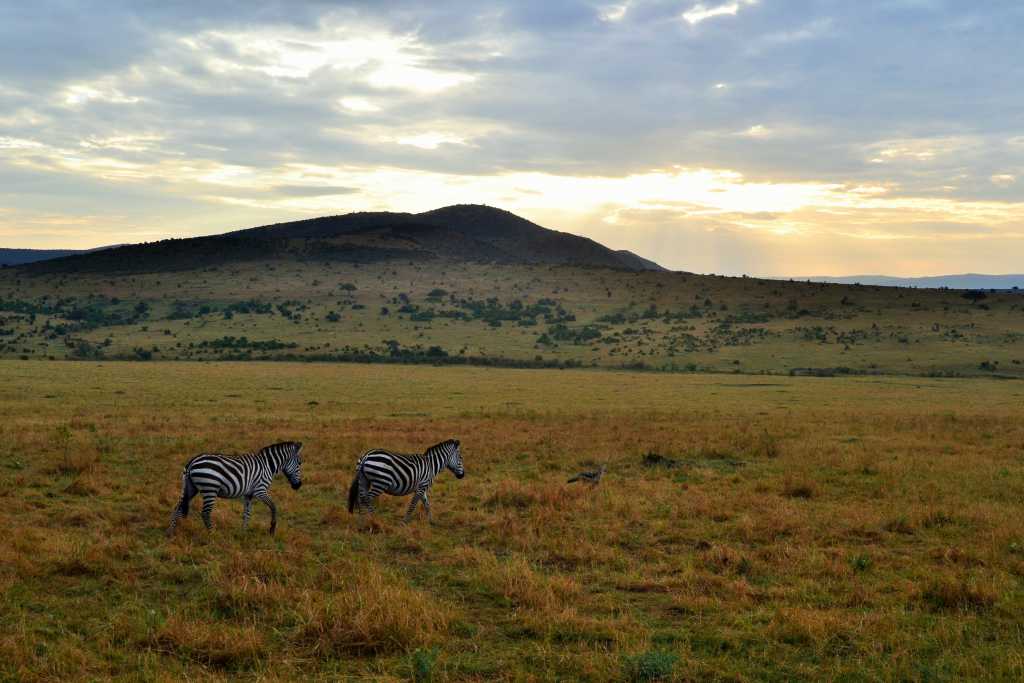 Weather changes easily and it suddenly pours. You will never know what nature can do to show itself off. The ideal orange sunset to rainfall is a surprise in its own. In a blink of an eye, things around us changes. A rainbow painted itself in the azure sky after the rain. Still not enough, it made itself a twin and invited a bit of sun rays to emerge. 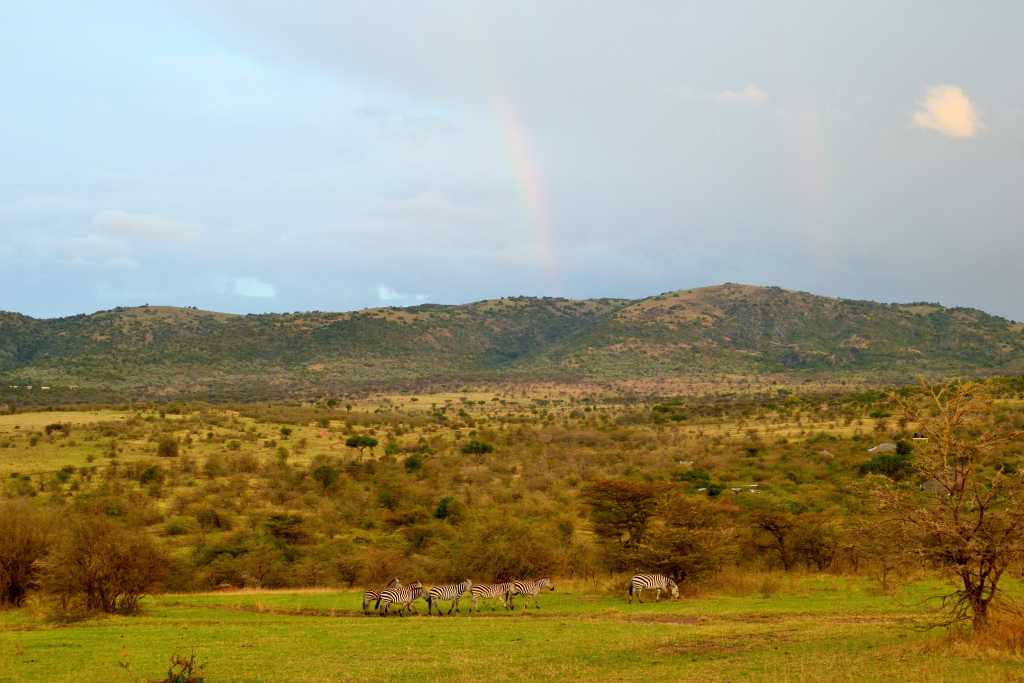 It is a sweet treat when every tree leaves, branches and twigs were washed and the land including its grasses were wet. The atmosphere changes and everything looks as fresh and splendid as this. Without a shade of doubt, rain, in its simplicity can fascinate me but a rain, a sunset and twin rainbows in the same day made our Day 1 filled with great joy and awe. 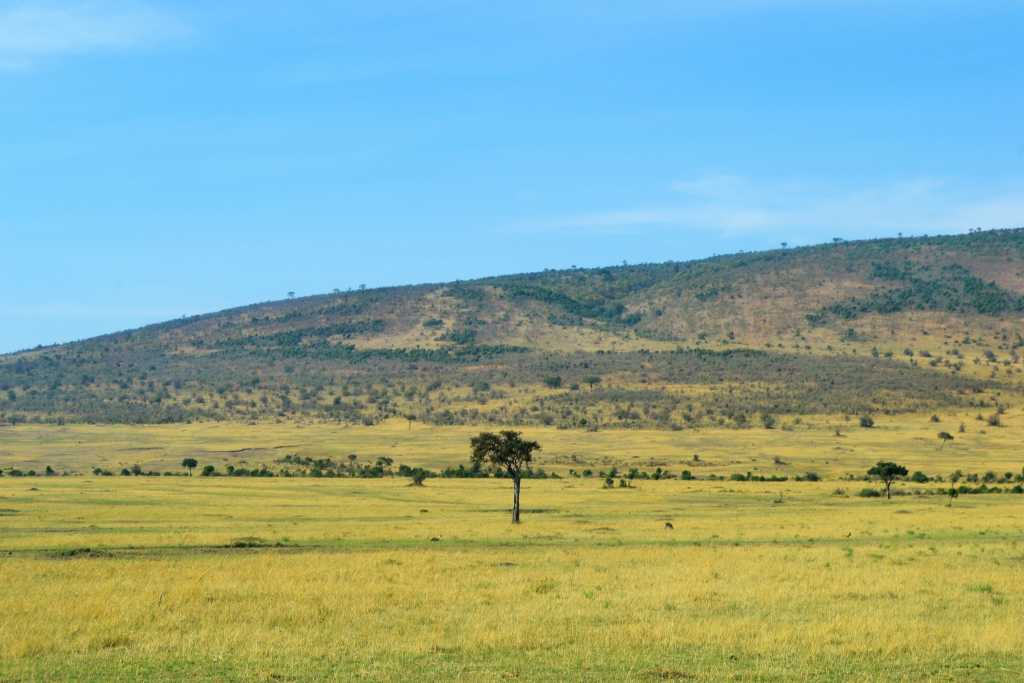 A land that stretches into the distance unlatched the door of our Day 2. Brimming with diverse wildlife, the Maasai Mara Reserve is a sanctuary of the big five, the small five, the ugly five and a lot more of different animal species including ostrich. 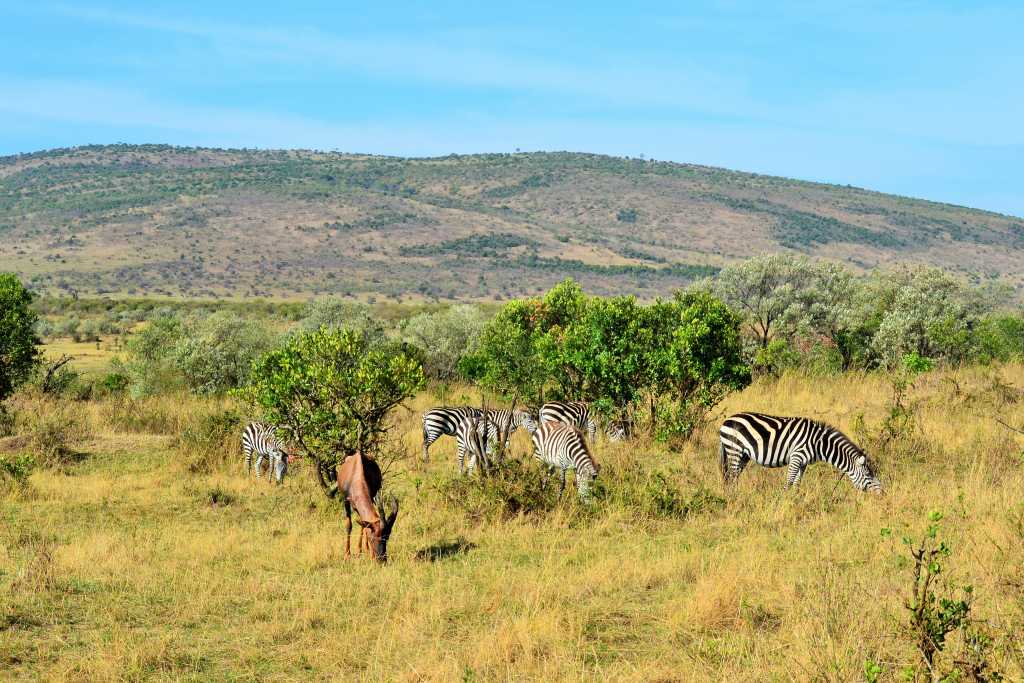 Impalas, zebras and buffaloes are everywhere. They are easily seen, making them the first group to welcome you when you enter the reserve. 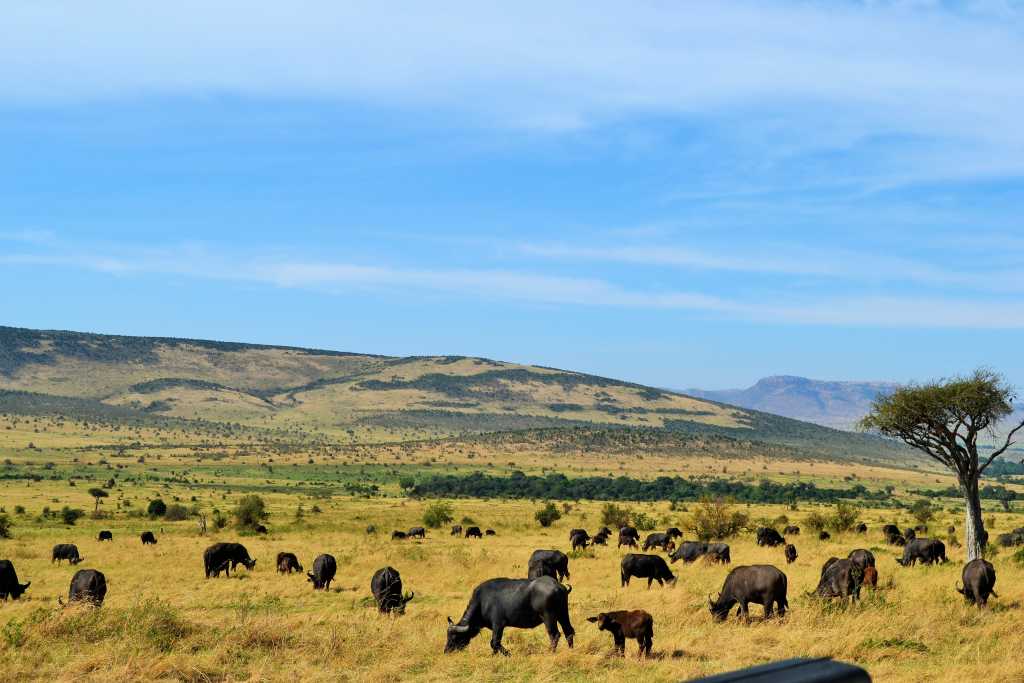 The intensity of our Game Ride increases when we saw Simba lazily resting around the bush.  Out of our excitement, we stood inside the pop-up roofed van to prepare for the first encounter. Our eyes were like telescopes, trying to reach the farthest, but for all we knew, the lion was just lying next to our van. That surprised us and at the same time made us petrified  and reluctant in taking photos. 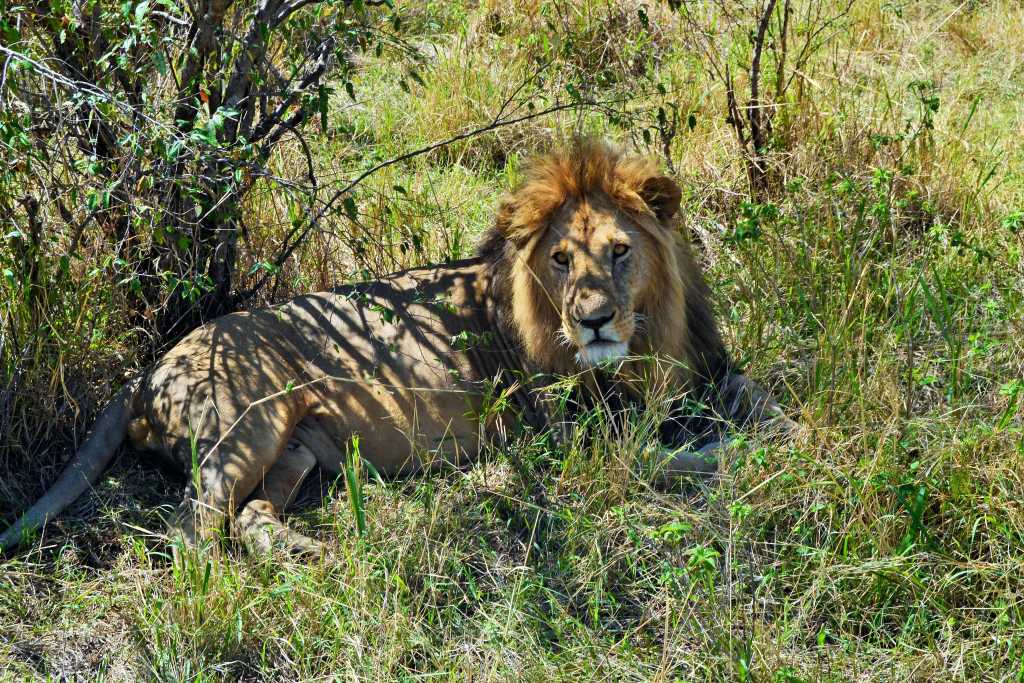 In another area, a pride of lion was also resting under the shade of a tree. Regardless of their size and color, they are really able to camouflage even in grassland. In here, it’s always wise to see behind the bushes and trees because that is where they are hiding. 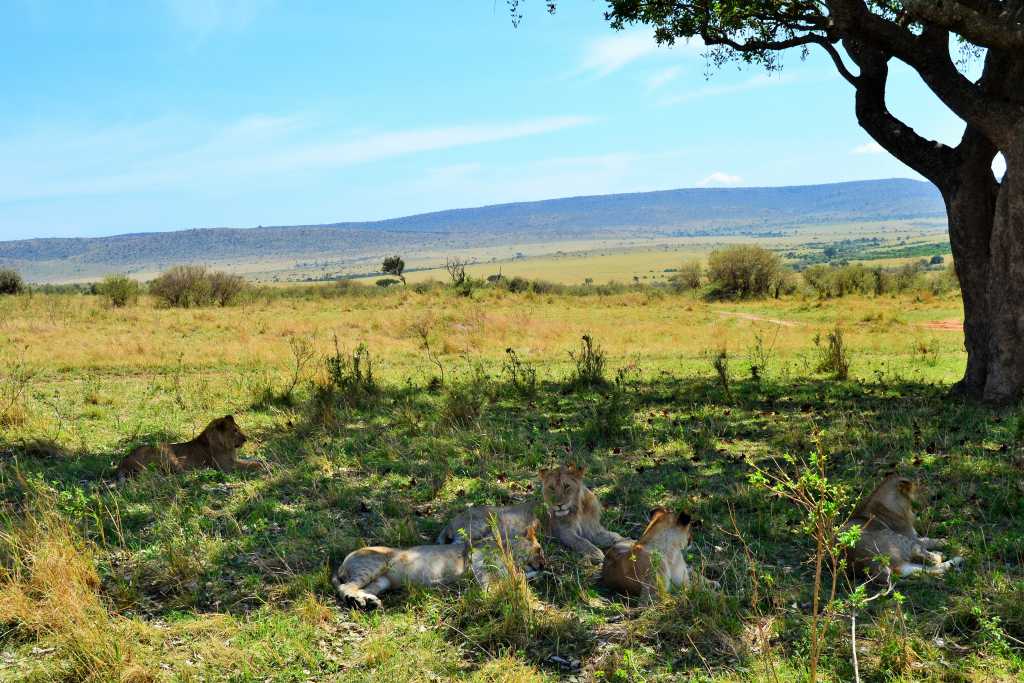 The fastest running animal in the world, Cheetah joined the animal force in welcoming us. Along with the other Game Riders and a Research Team, we spent around 20 minutes watching their rare movement. We realized that there were 2 male and 1 female in this team. Since cheetahs have no pair bonds, they mate with any members of the opposite sex. The males associated with females for mating only and they won’t provide parental care after. In this case, both male left the female. We thought their mating season was intruded by the noisy Game Riders. The research team was also  disappointed with the ending. 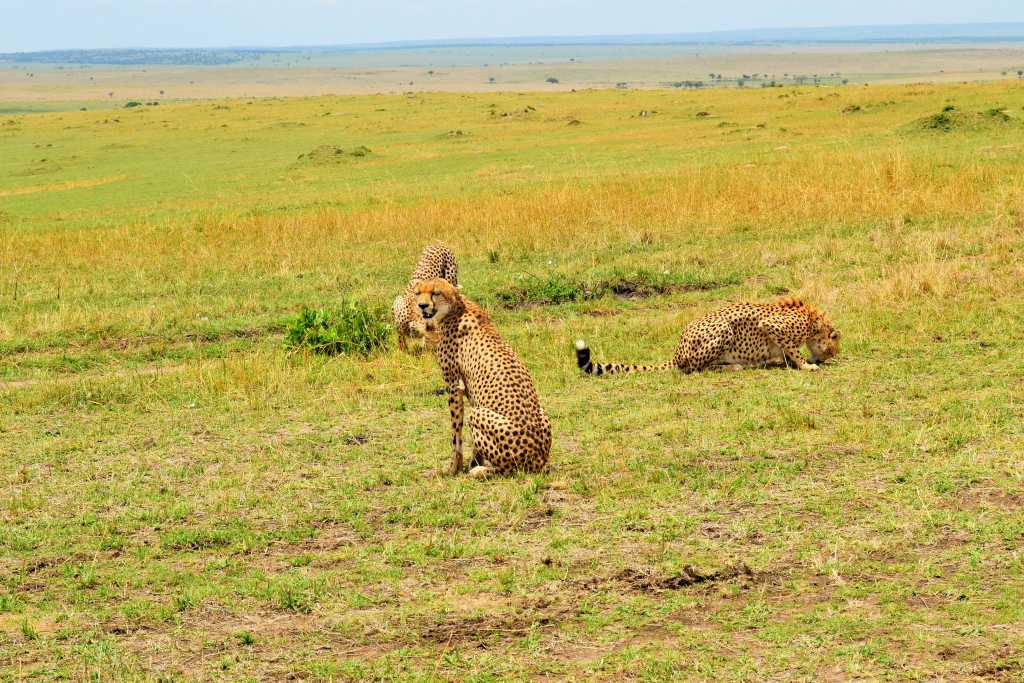 I felt like I’m in a zoology class studying animal behavior and development. 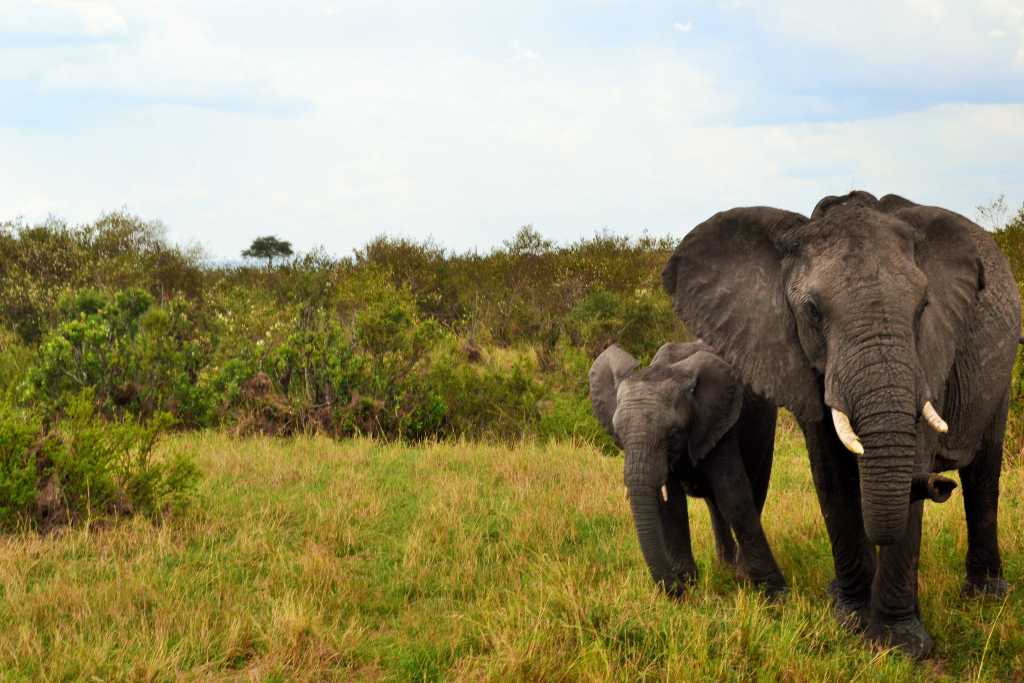 While watching these elephants, a very foul and disgusting smell offended our senses. Behind the bushes near us, was a newly captured prey. Vultures, which are many in the reserve were feasting. They are the scavengers and would eat the leftovers of the predators. Bones, horns and animal skin are also found in many areas inside the Reserve. 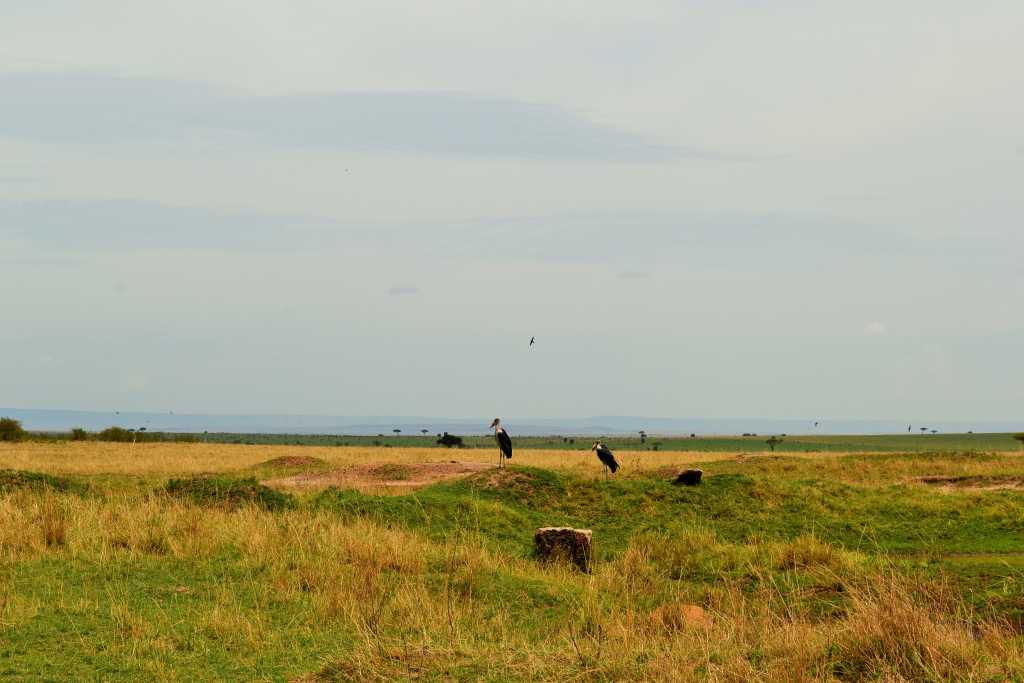 The Mara River  which is famous for the annual great migration is the haven of hippos and large crocodiles, but dreadful among zebras and wildebeests because they needed to cross the river to be in a lusher green grassland. The other side of the River is Tanzania’s Serengeti National Park. We were exactly at the border! 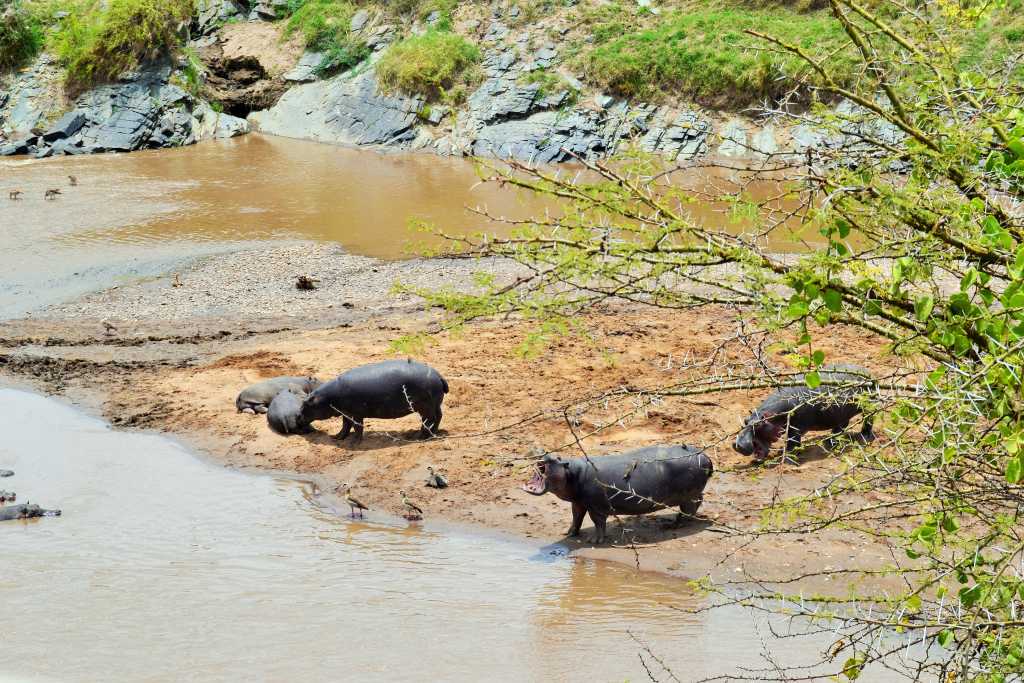 Thousands of wildebeest occupied the pastoral land of Masai  Mara. Seeing them from afar would make them appear like dots. 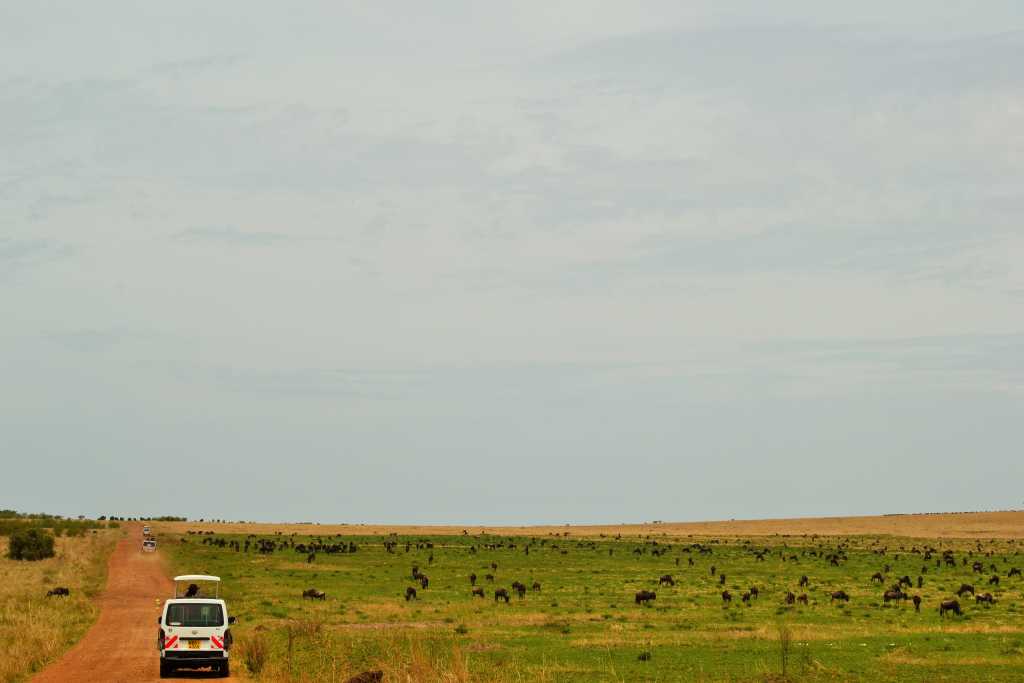 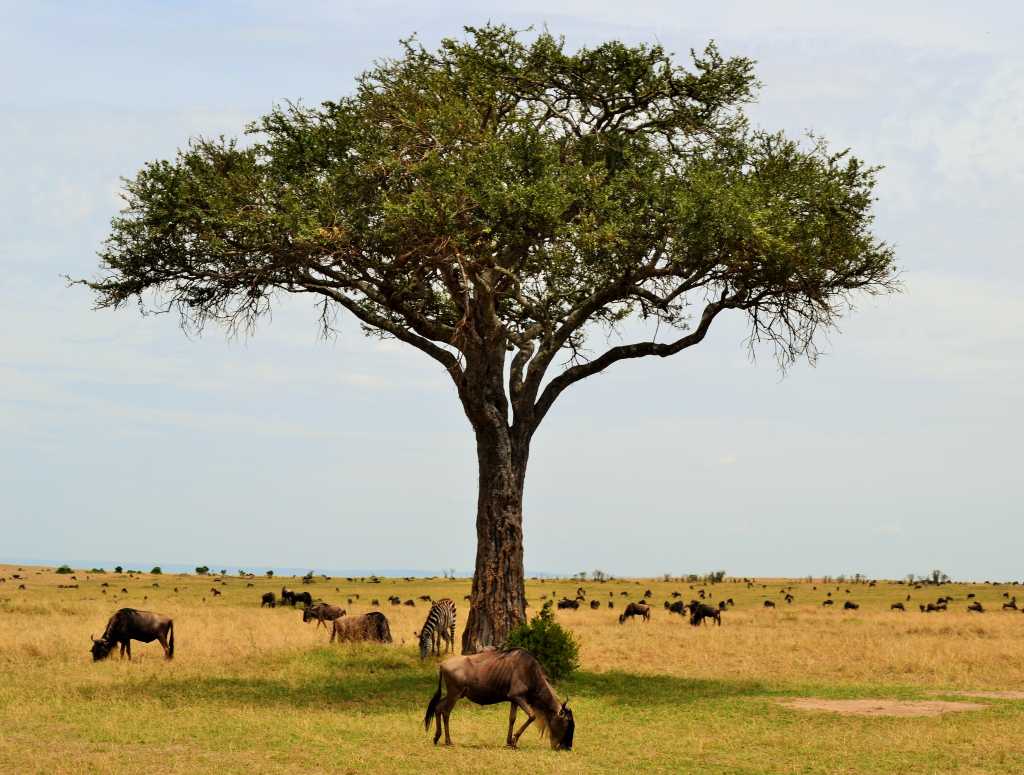 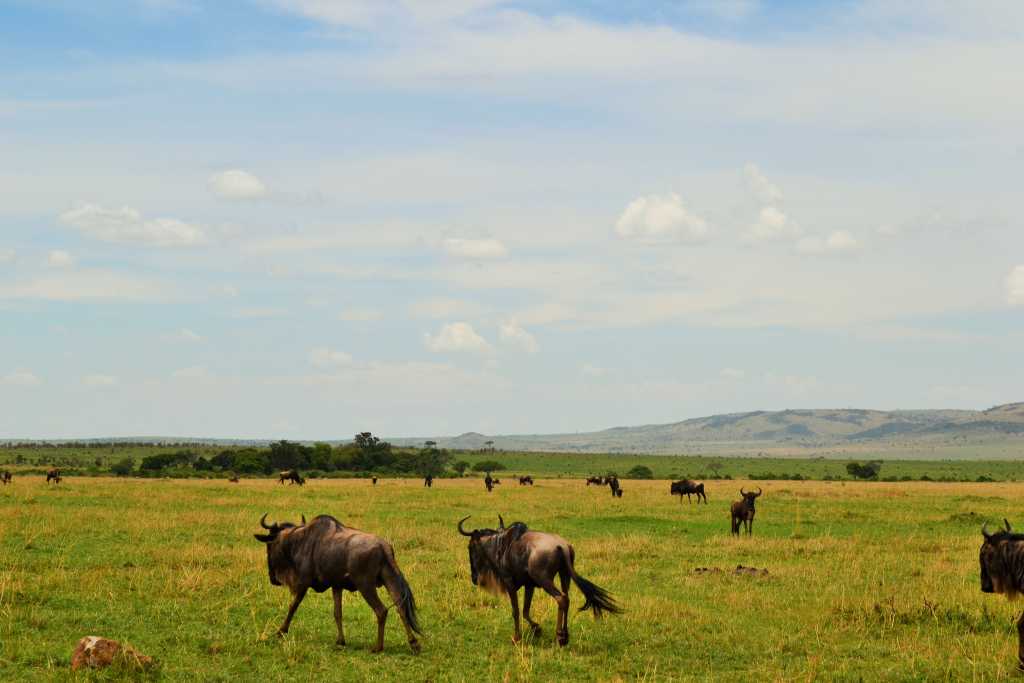 Since the Game Ride is whole day, our lunch was packed and we had our picnic inside the reserve, far away from the wild animals. We had our late lunch under the shade of a tree while enjoying the beauty of the endless scenery in the countryside. 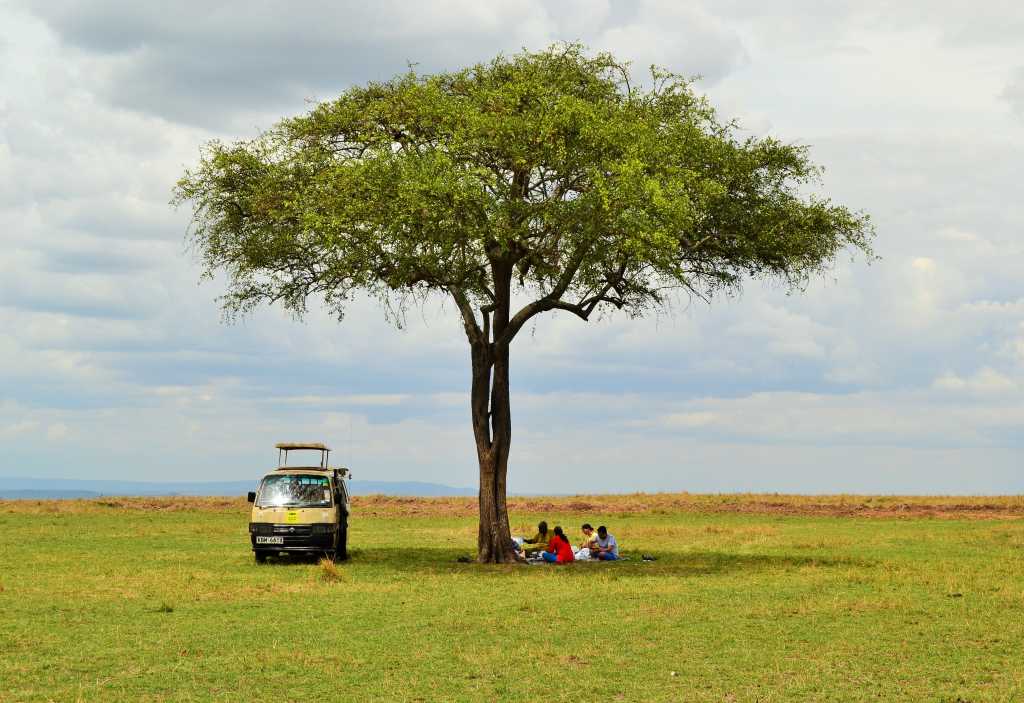 After lunch, we continued the Game Ride and met Pumba, the Warthog along the way. It made me remember my favorite childhood cartoon movie, the Lion King. 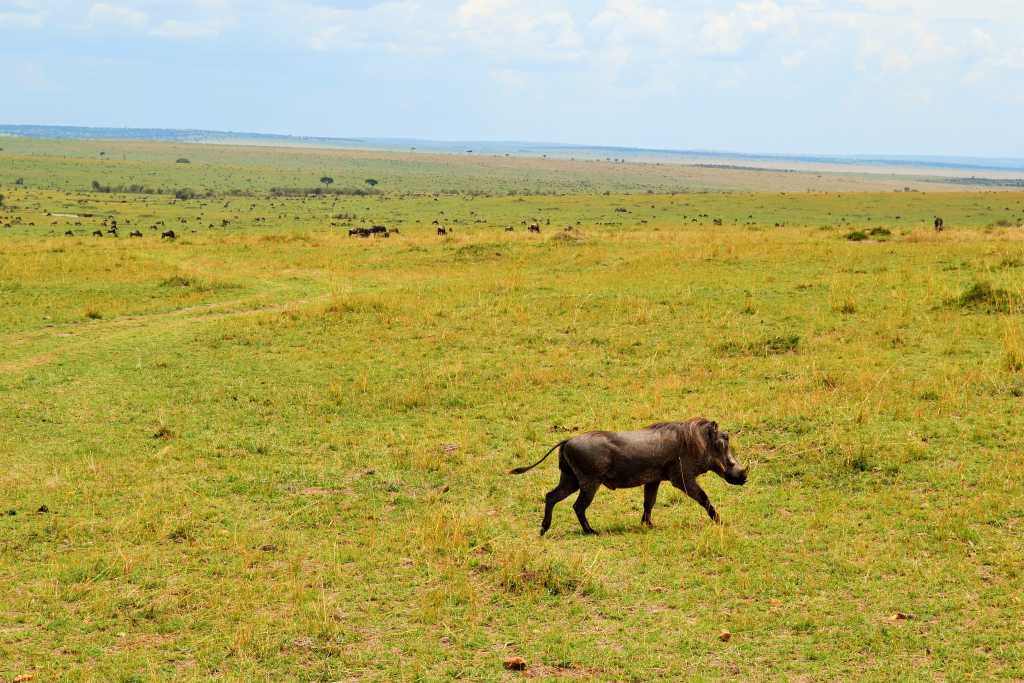 Rain starts to fall and we also met a Hyena who is unusually alone in the wilderness. That moment made the list of “Ugly Five”  all checked. We saw the Stork, the Vultures, the Warthog, the Wildbeest and the Hyena in the same day. 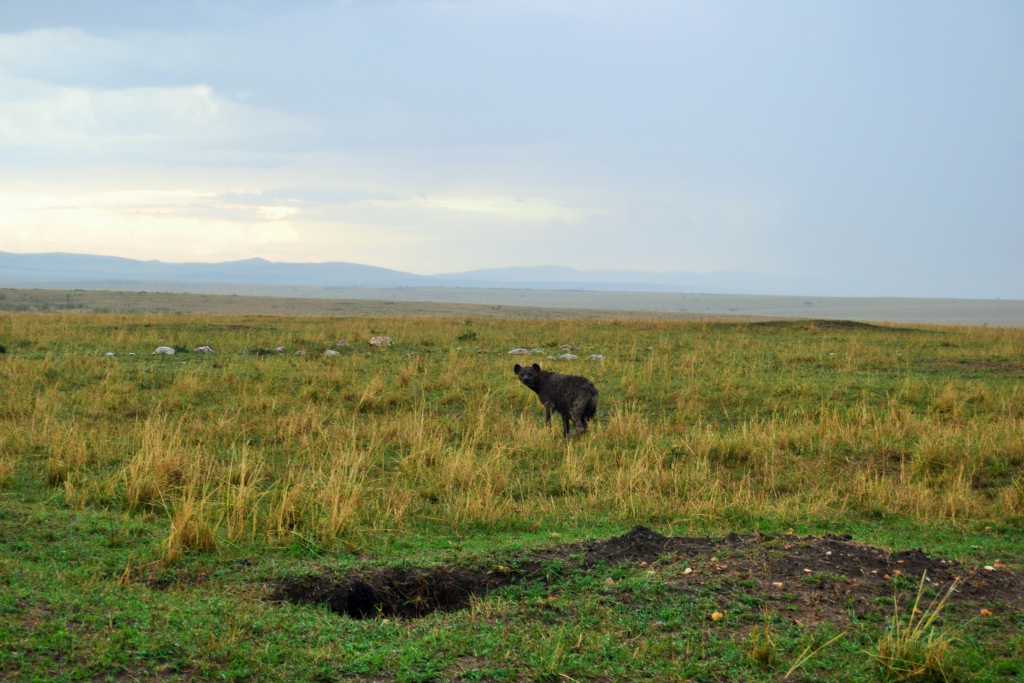 As the day ended, this very accommodating giraffe appeared at the side of the road and many of its kind started to show themselves to us. 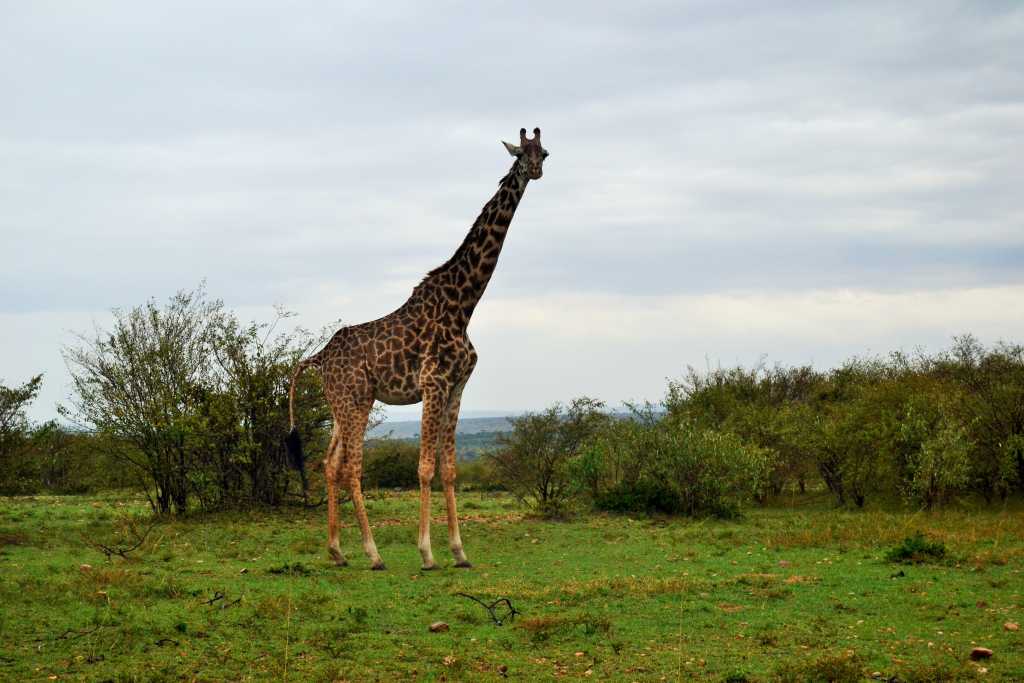 We reached the campsite very late in the night because we went out late from the reserve and the rangers held us as it is not allowed. Nonetheless, it’s again another beautiful and exciting day for all of us. 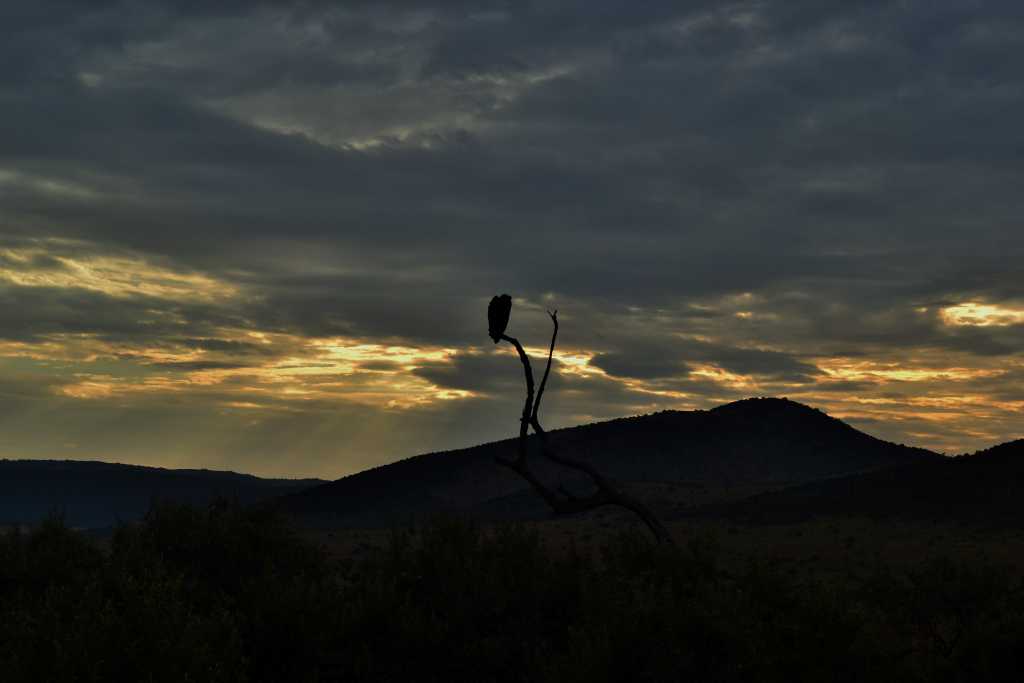 We started Day 3 so early that the sun didn’t shine yet. Since that was the last day of our stay in Masai Mara and our time was already limited, we decided to rise early and went to the reserve again for a short Game Ride hoping to see the elusive Rhino and Leopard, two more to complete the Big Five but we didn’t see them unfortunately.

The rest of the morning was spent with the Maasai Tribe. You can check the details of our experience at The Maasai Tribe of Kenya.

Have you ever wondered about our stay in Masai Mara? 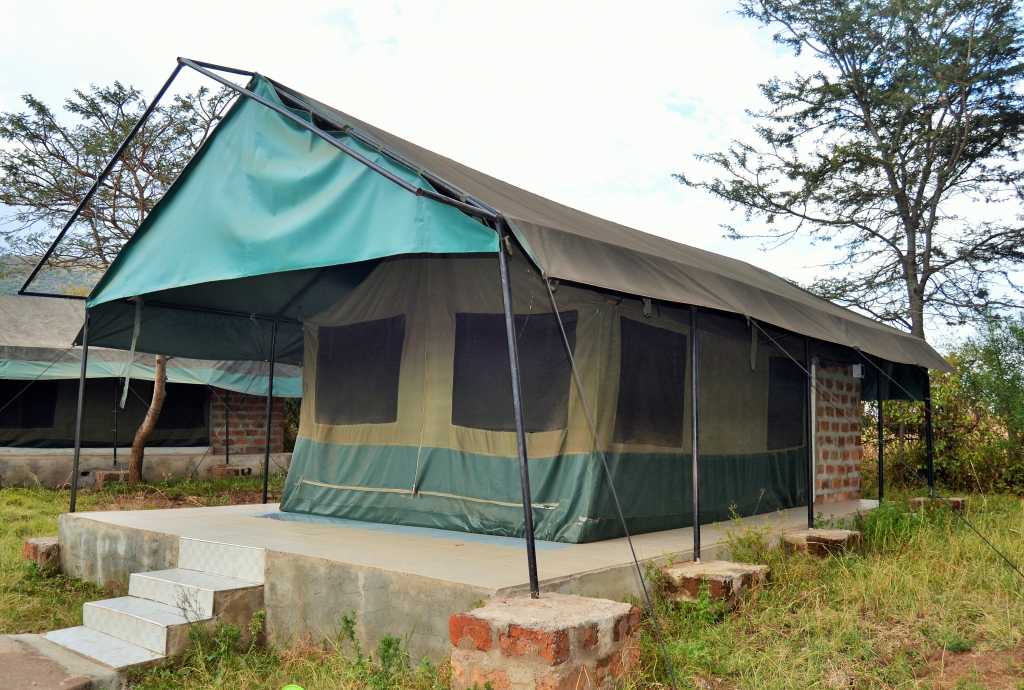 We stayed in a tented camp. Obviously, no locks but has the things needed to survive. It has a bathroom with hot water, thanks heavens! as the water here is ice cold and a bed. Electricity is only accessible from 06:00 in the evening until 10:00 and will again come back at 06:00 in the morning to 09:00 in the morning. There is no way to charge between those hours. 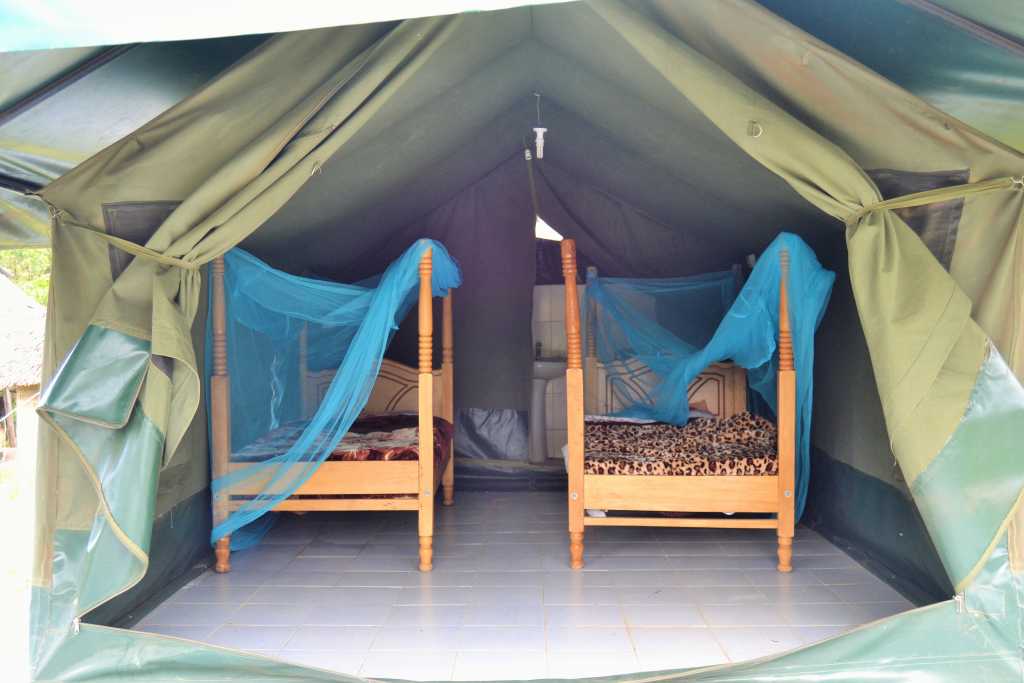