Wondered what’s my sore in Mysore? It was a holiday and most of the tourist spots were closed!

Mysore, known as the city of palace  is the cultural capital of the state of Karnataka and was previously known as the Kingdom of Mysore ruled by the Wodiyar family. This place is famous for arts and culture because the Mysore kings were arts enthusiasts and their legacy continues to influence the new generation.

We reached Mysore past midnight from Calicut yet not tired. That was one of the longest road trip I had yet the funniest by far. The next day we started to uncover the city. 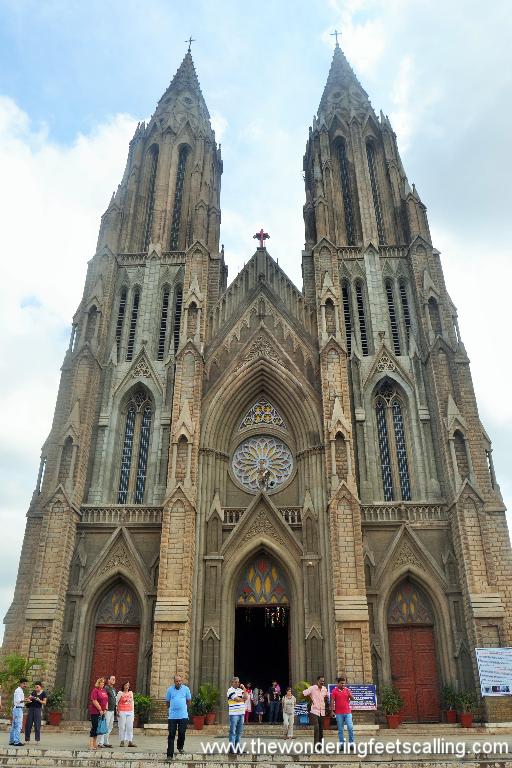 Our first stop is the St. Philomena’s Church. Inspired by the architecture of the Cologne Cathedral in Germany and manifested by pointed arches and vaulted ceilings, this Neo Gothic styled Catholic church  was built and fortified in 1956.  The twin fleche of the church is 175 feet  in height, making it a distinctive landmark around the city. The church’ floor plan resembles a cross. Its windows are stained glass illustrating the birth of Christ, the last supper, the crucifixion, the resurrection and ascension of Jesus Christ. 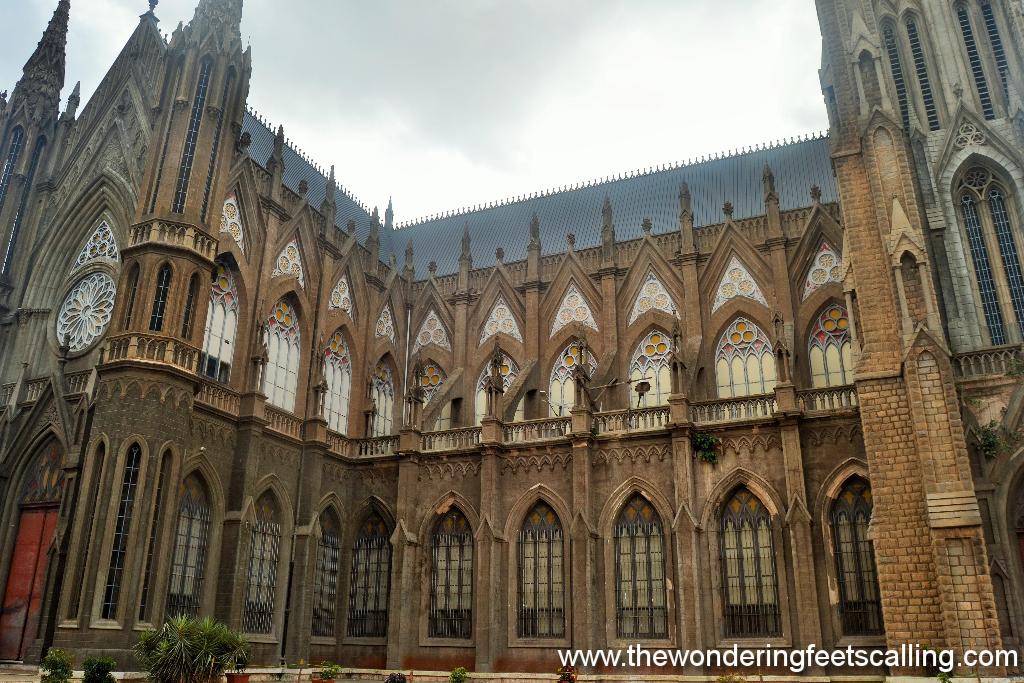 Below the main altar is a catacomb preserving the relics of the saint. The underground has two exits, both have walls which have a lot of prayers written on it by different people. When we get there, writing on that wall is no longer allowed. Taking the exit, you will go out and see this grotto on your right. By the way, taking photos is not allowed inside the church. 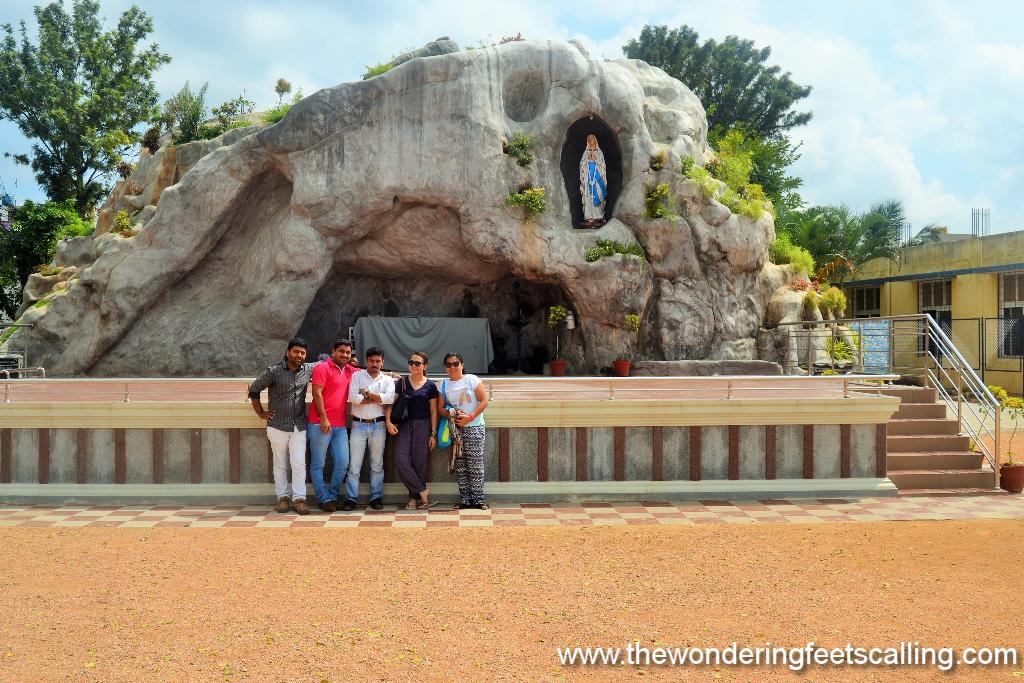 After the church, our guide took us to one of the shops which are selling souvenirs. Though not much interested, we make a way for our guide and agreed to be there because the shop will be giving him 1 liter of petrol or so.  As I observed, this is common in the state of Karnataka. 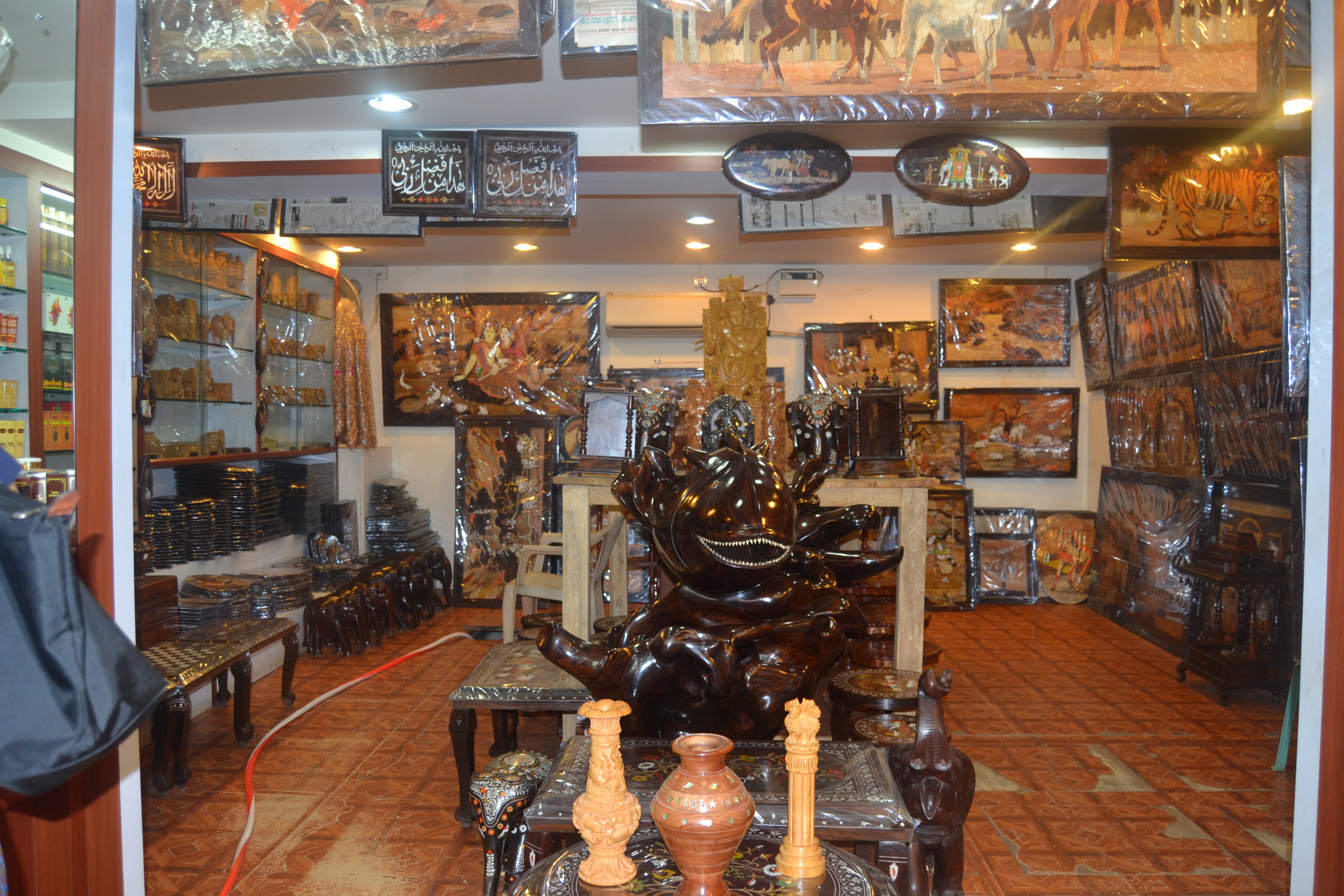 Then, we proceed to the famous Mysore Palace, the official residence of the Wodiyar’s, the Maharajas of Mysore (the royal family of Mysore).  Before we brought ourselves inside, we still wandered outside and checked as to what every stall has for us. Refreshment is  also available so we took one 🙂 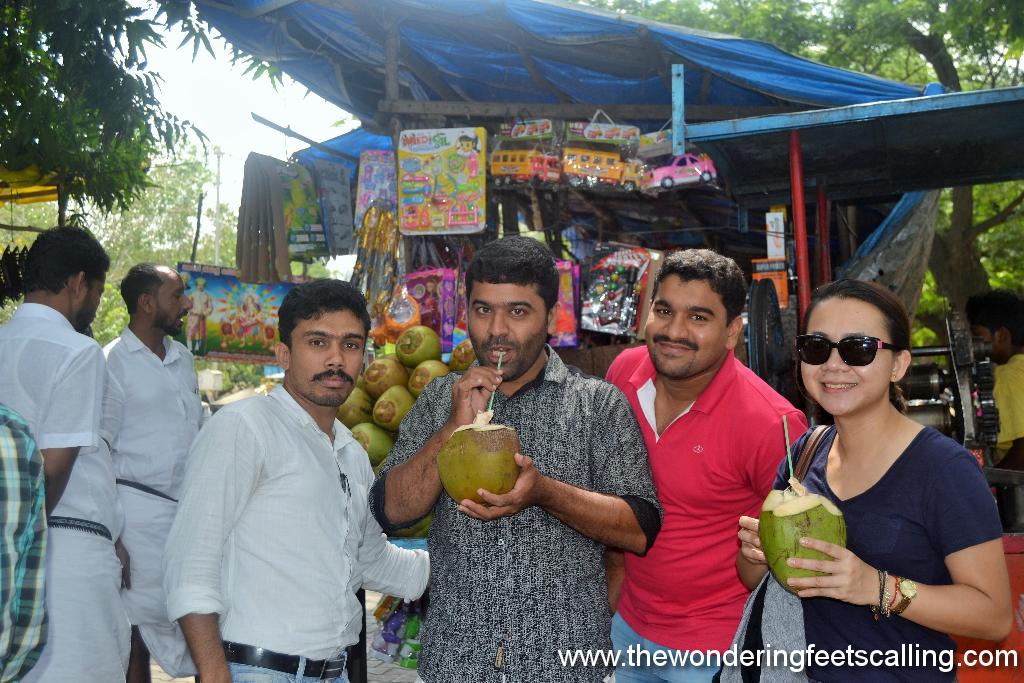 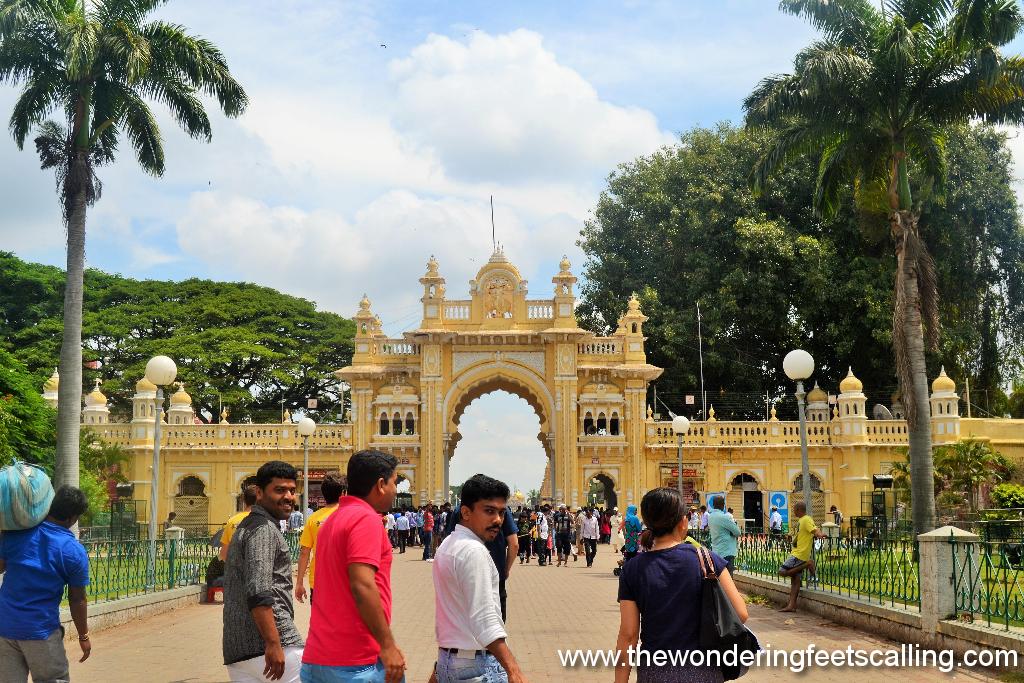 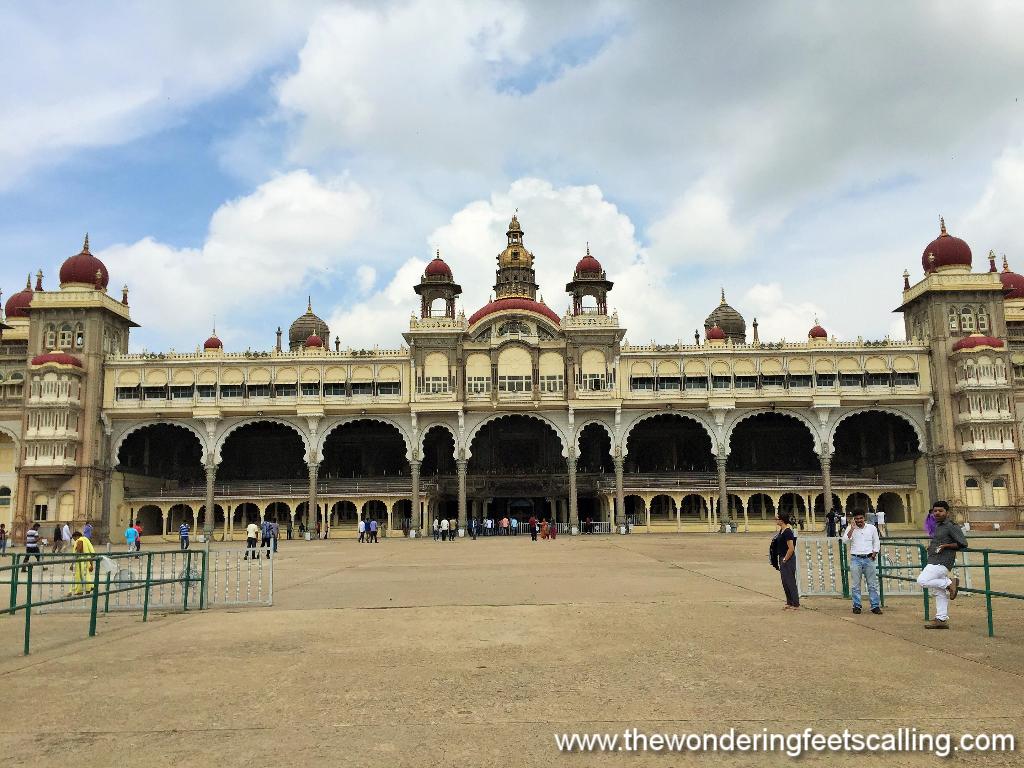 The façade of the three storied granite building has seven expansive arches with two small arches on the side of the central arch. Above the stone structure are the beautiful deep pink marble domes flanking on the edges of the palace and the central arch. Historically, this palace was previously made of wood but was destroyed by a fire. Using the same foundation, they rebuild the palace ensuring that it’s fireproof since then. 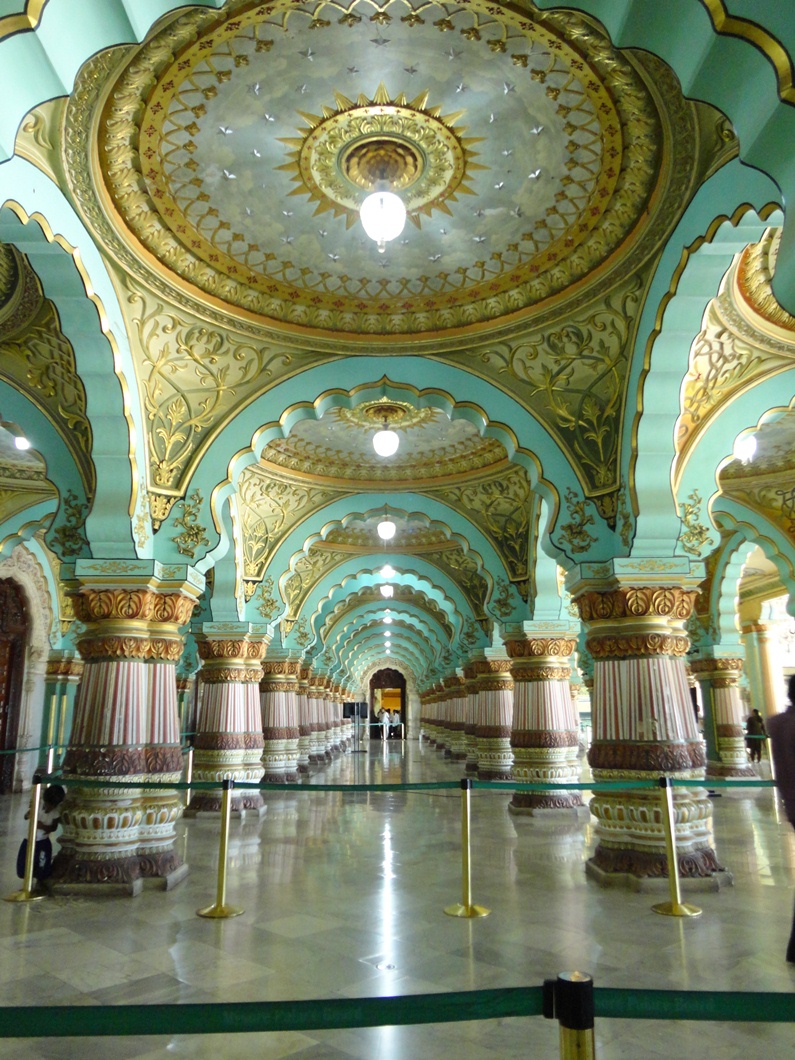 Every part of the palace’ interior is an eye-catcher that can glue your eyes on, an attention-grabber that holds your interest, a mind-blower that is capable of taking you to another world and an amazement-maker that  could stop anyone in track. This is a lavish house of art work. The walls, colorful palace columns and ceilings are not merely painted, every detail of it is exquisitely and meticulously carved to perfection by many skilled and gifted hands. 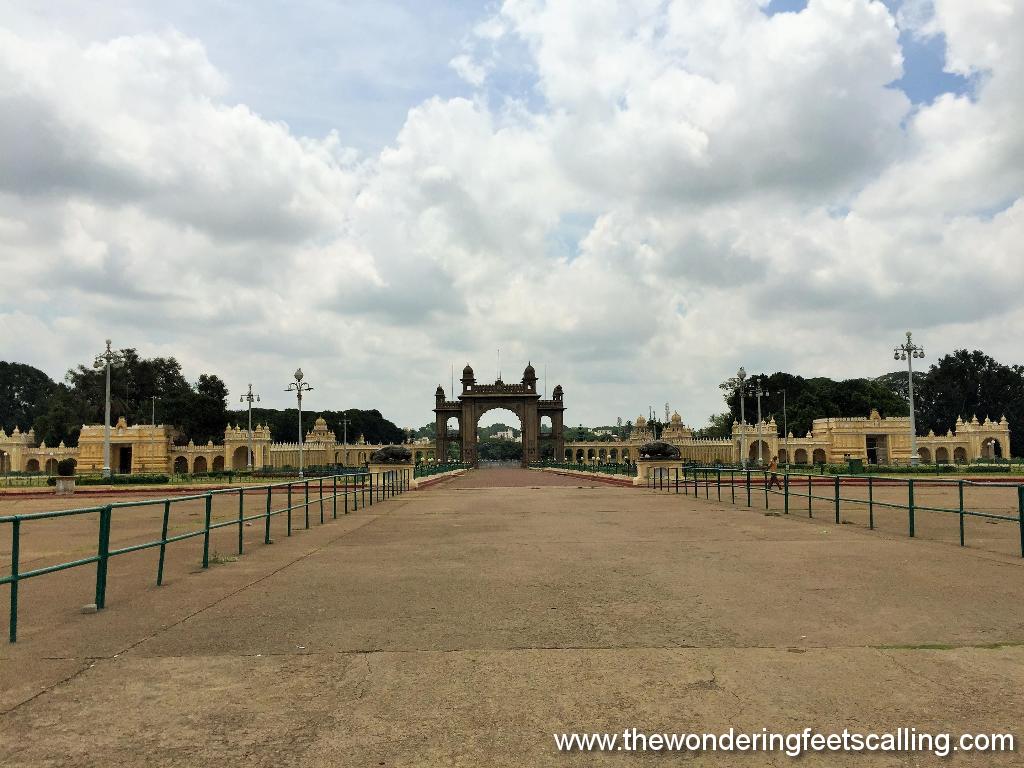 The palace has a total of five gates. It is surrounded with a wide garden adorned with different colorful flowers. Except Sundays, the palace is illuminated from 19:00 to 19:45 yet we were not able to see it. 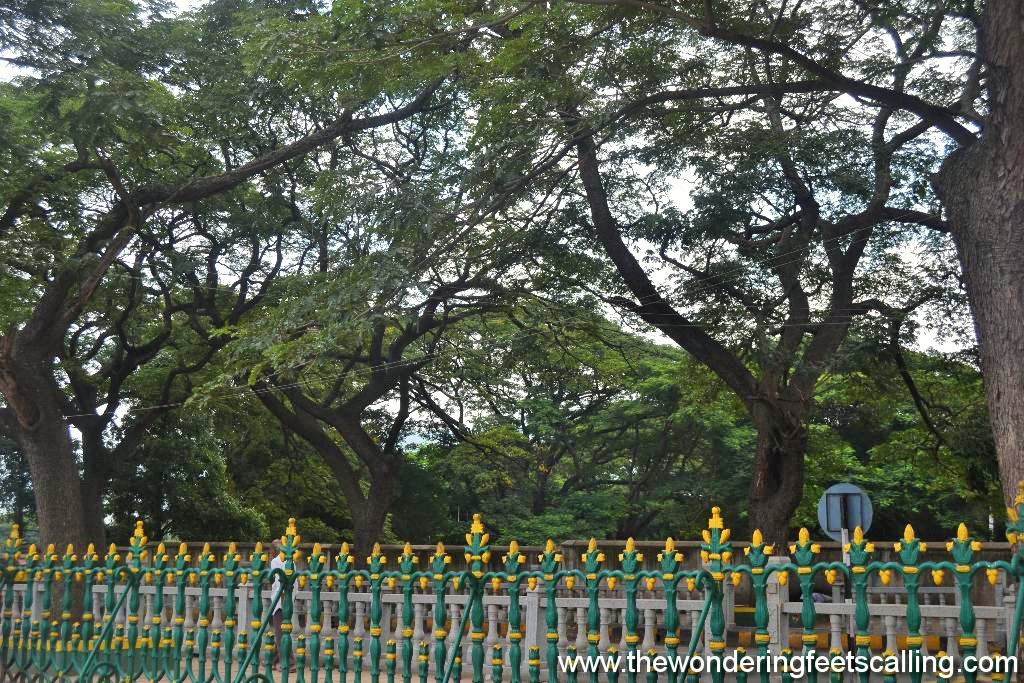 The roads in Mysore are green-filled and shaded with tree leaves and twigs. You will also see many wild cows freely roaming the streets while some have ornaments on their body used by residents for begging. 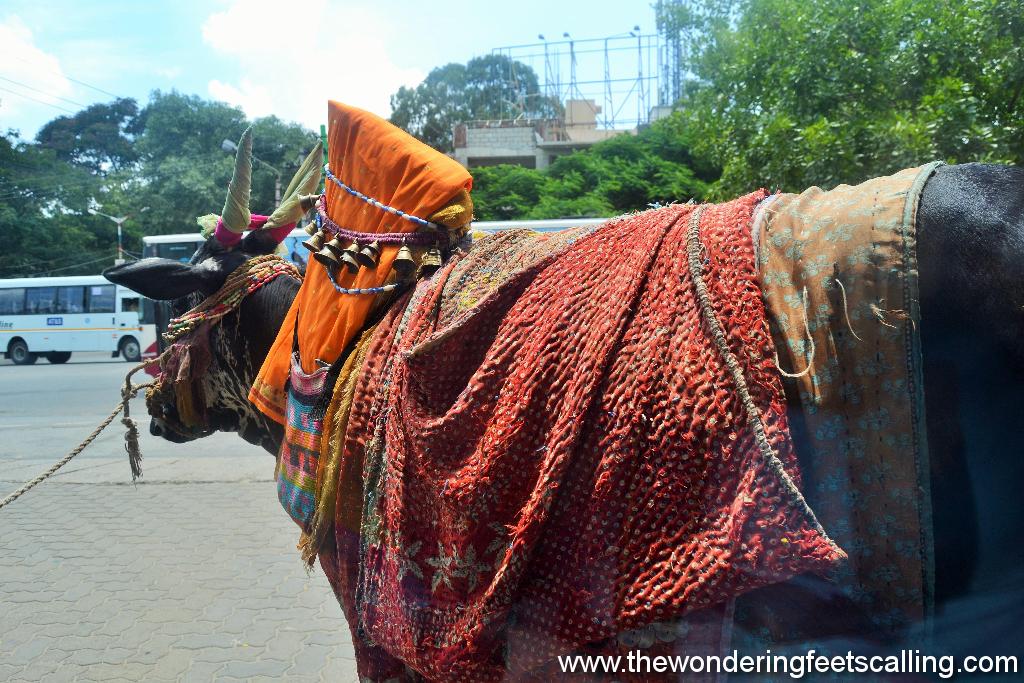 Since many spots were closed that day, we in line ourselves to the ticketing counter  to get a ticket to Bangalore but strangely, after approaching one of the counter staff, he suddenly disappears from his chair. We approached the other one with a poker face and told us that the system is down and no further question was entertained. I cannot understand if they were just unwilling to speak, not willing to accommodate, rude or we were just having a language barrier.  Good thing, the man standing behind us told us that we can get a ticket from the bus. 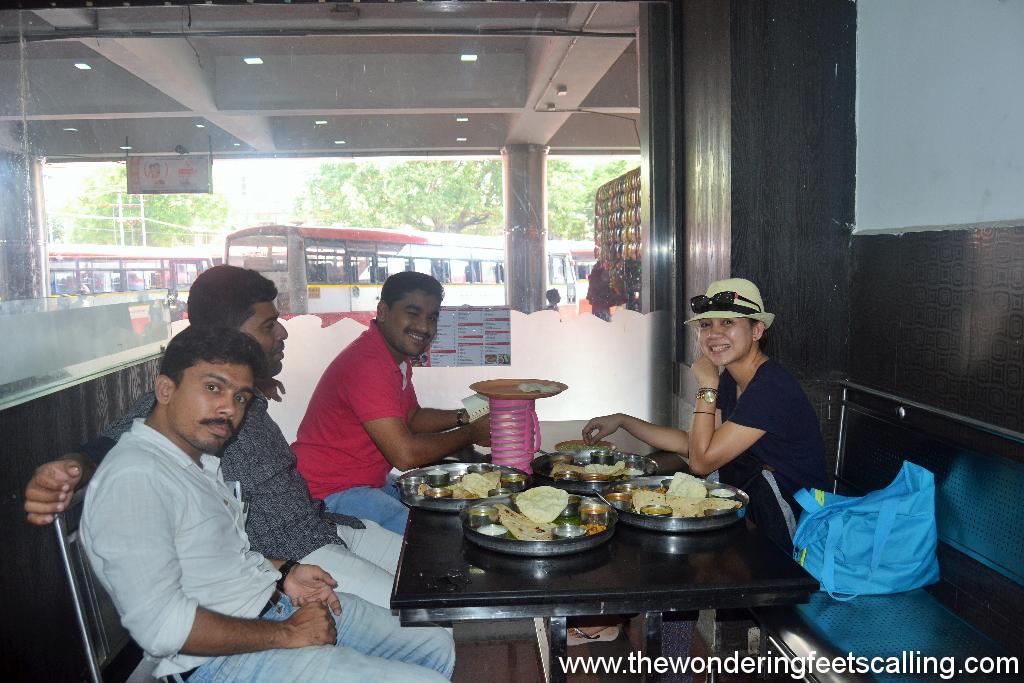 So we decided to take our lunch before we sadly part ways. We headed Bangalore by a local bus while the three monkeys went back to Calicut. 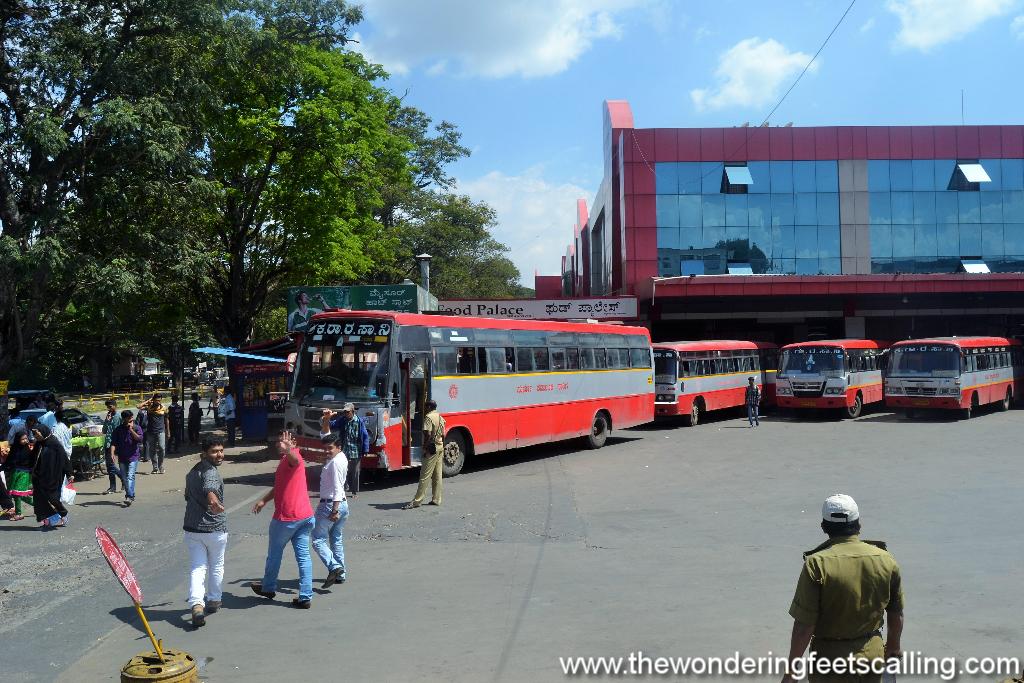 These guys truly enrich our experience in India. Apart from all the spots, the people that we met here matters the most. As Anthony Bourdain says, You leave marks when you travel and in return, life and travel leaves mark on you. Most of the time, those marks are on your body or on your heart. Saddened to bid goodbye to the funniest game-changers of Calicut 🙁

“To travel is to discover that everyone is wrong about other countries.” Aldous Huxley

Wayanad the Land of Paddy Fields

Savored The Best of Munnar